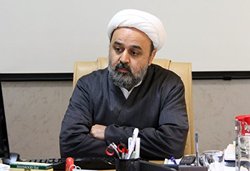 Hujjat al-Islam Shahriyari called for more attention and effort to be paid to Fiqh al-Muqaran (Comparative Fiqh) in the Islamic Seminaries and considered it important to bring Islamic schools of thought closer together.

RNA – Hujjat al-Islam Hamid Shahriyari met with Grand Ayatollah Naser Makarem-Shirazi, a revered source of emulation, at his office in Qom for a discussion on a number of pressing issues.

The secretary-general of the World Forum for Proximity of Islamic Schools of Thought considered Islamic unity as an important issue and said, “Creating division between the components of the Islamic body has always been on the agenda of the arrogant powers of the world and the creation of Takfiri and extremist groups has also been used to present the Islamic world as having a troubled face.”

He called the creation of Takfiri groups, such as Daesh and al-Qaedah, a program by the arrogant front to divide the Muslim world and praised the unprecedented efforts of Martyr Qasem Soleymani to counter these movements and honour the memory of the commander of the Islamic Resistance.

Hujjat al-Islam Shahriyari emphasized that moving toward the ideology and thought of the late Grand Ayatollah Sayyed Hoseyn Boroujerdi is on the agenda of the World Forum for Proximity of Islamic Schools of Thought and said, “In the thought of the late Ayatollah Boroujerdi, approximation doesn’t mean abandoning the principles and beliefs but rather, it provides a deep and accurate basis for Ja’fari jurisprudence and the formation of links.”

In another part of his remarks, he stated that Ayatollah Makarem-Shirazi was a pioneer in the fight against Takfirism, he said, “He was very active in this regard and this shows that the institution of the Shi’ah religious authorities (the sources of emulation) is vigilant and fully on the scene.”

Hujjat al-Islam Shahriyari said that the prevention of divisive programs in the Islamic world is one of the missions of the World Forum for Proximity of Islamic Schools of Thought.