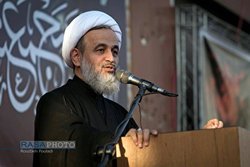 The seminary and university teacher said that Shaykh Ibrahim Zakzaky transformed Africa ‎and said, “Unfortunately, that some Iranians politicians haven’t taken any stance against ‎oppression and are silent regarding the oppression of the arrogant powers.” ‎

RNA – Speaking at a conference entitled “Supporting Shaykh Zakzaky, Nigeria’s Oppressed ‎Leader” held at Tehran’s Imam Reza Seminary on January 1st, Hujjat al-Islam Alireza ‎Panahian, a seminary and university teacher, said, “The ‘global village’ and the integration of ‎global systems is an issue that has been discussed for several years.”‎
‎ ‎
The renowned lecturer added that the United States considers the Islamic Resistance ‎throughout the world as the greatest obstacle to attacking Iran and said, “Iran’s security is ‎guaranteed by the intellectual and spiritual bond between Islamic societies.”‎

He pointed out that foreign countries are investing in cultural domination in other countries ‎and added, “The first step of saving Shaykh Zakzaky must be provided, otherwise we will be ‎harmed and this is a divine promise. We must not be indifferent to the Islamic world and the ‎people of the world.”‎

Hujjat al-Islam Panahian emphasized that some Iranians politicians haven’t taken any stance ‎against oppression and this can be seen in their one-year diplomatic silence regarding the ‎Yellow Vests’ demonstrations against capitalism in France and said, “According to the ‎commands of the late Imam [Khomeyni], the neglect of the authorities in regard to ‎exporting the Islamic Revolution is a betrayal of the revolution. The authorities must not ‎neglect to awaken the nations.”‎
‎ ‎
His Eminence said Shaykh Zakzaky is a role model for the freedom-seekers of the world and ‎noted, “The Islamic Revolution of Iran was the beginning of a movement to establish a ‎world government and therefore, the authorities’ failure to pursue this issue is a betrayal.”‎

He stated that we are ashamed of Shaykh Zakzaky suffering and said, “Ultimately, hardships ‎and illness didn’t stop him from resisting. If he yields to the Nigerian government right now, ‎his situation will change. Despite the economic and financial hardships that the scholars and ‎seminarians are currently facing, they will never over take struggles and efforts of Shaykh ‎Zakzaky.” ‎

Emphasizing that Shaykh Zakzaky transformed Africa, Hujjat al-Islam Panahian said, “With ‎the hardships that exist in Africa, transformation requires the perseverance, spirituality and ‎tenderness that Shaykh Zakzaky was able to bring to Nigeria with these characteristics.”‎
‎ ‎
In conclusion, he stressed, “The enemies know that if Shaykh Zakzaky was able to be active ‎freely, he would wake up the whole of Africa. For this reason, they are striving hard to ‎convert the African people to Christianity. The authorities are shouting about the oppression ‎and efforts of Shaykh Zakzaky throughout the world.”‎

Hujjat al-Islam Shaykh Ibrahim Zakzaky is an imprisoned outspoken and prominent Shi’ah ‎Muslim leader in Nigeria. He is the head of the Islamic Movement, of Nigeria, a movement ‎that he founded in the late 1970s.‎