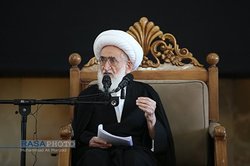 Condemning the American attack on the Popular Mobilization Forces in Iraq, Ayatollah Nouri-‎Hamadani emphasized that Iraqis don’t allow foreigners to interfere in their country’s affairs.‎

RNA – Speaking at the beginning of his lesson in Islamic jurisprudence at Qom’s Grand ‎Mosque of Qom on December 31, Grand Ayatollah Hoseyn Nouri-Hamadani condemned the ‎attack by the United States on the Popular Mobilization Forces in Iraq and prayed for the ‎martyrs of this attack to be forgiving and be given a lofty status. ‎

The revered source of emulation considered the Iraqi people as a people of culture and ‎independence who will not allow anyone to interfere in their affairs and have always ‎protected and will continue to protect their dignity and independence.‎
‎ ‎
He described the Popular Mobilization Forces as a popular force in Iraq and condemned the ‎criminal act of the United States which has always been an arrogant power which interferes ‎in the affairs other countries. ‎

Following the strikes, the Pentagon issued a statement saying that it had targeted three ‎locations of the Popular Mobilization Forces forces in Iraq and two in Syria in response to ‎alleged attacks targeting American forces.‎

Tags: Nouri PMU Iraq
Short Link rasanews.ir/201sbX
Share
1
Please type in your comments in English.
The comments that contain insults or libel to individuals, ethnicities, or contradictions with the laws of the country and religious teachings will not be disclosed