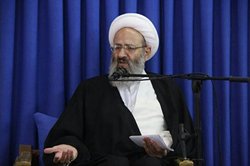 RNA – In his ethics and exegesis lesson held at Qom’s Ayatollah Golpaygani Seminary, ‎Ayatollah Mohsen Faqihi, a member of the Society of Seminary ‎Teachers of Qom, referred ‎to Imam Khomeyni’s book “Forty Hadiths” and said, “One of the points that the late Imam ‎explained is that self-conceit and egotism are among the issues which lead mankind to ‎perdition.”‎
‎ ‎
The head of the Dar al-Thaqalayn Wali al-Asr Institute referred to the origin of self-conceit ‎and added, “According to the late Imam, the source of self-conceit is love of one’s self. For ‎this reason, sometimes a person does a minor and trivial deed but thinks that he has done ‎the greatest thing and even in some cases the situation becomes worse than this and man ‎does a bad or immoral deed but thinks he has done something good.” ‎

He stated that man must not see his small works as substantial and explained, “Sometimes ‎someone justifies his bad deeds and thinks that he has done the right thing. He engages in ‎backbiting, slandering and lying and justifies it while these actions are wrong.”‎
‎ ‎
Ayatollah Faqihi continued, “One must consider himself superior to others. Man should take ‎divine satisfaction into consideration in all his work, not love of the self. If deeds are done ‎for divine satisfaction only, their value will be infinite.”‎
‎ ‎
The teacher in the Islamic Seminaries of Qom said that the late Imam Khomeyni was a great ‎teacher of ethics and stated, “All of the Imam’s behaviour and actions were a lesson in ‎ethics and religion and today, the seminarians must benefit from their tradition and make it a ‎priority in their actions.”‎
‎ ‎
He stated, “According to the narrations, the arrogant and self-conceited are close to disbelief ‎because only God is great and the pride is specific to the divine essence. Sometimes those ‎who are around others misguide and victimize them through their own unwarranted ‎definitions.”‎
‎ ‎
Ayatollah Faqihi noted that after the death of Ayatollah Boroujerdi in 1961, many sought to ‎declare that they are a source of emulation, but Imam Khomeyni, despite his lofty position ‎and great students, didn’t enter the matter until his duty was fulfilled and added, “The late ‎Imam gained popularity in the world due to divine favour and due to the sincerity that he ‎had on the divine path and was respected by all. Today, people are even making pilgrimage ‎to his grave on foot. This human value is great and God would magnify in a person if he ‎distances himself from material and worldly belongings.”‎

Tags: Faqihi Ethics Morality Khomeyni
Short Link rasanews.ir/201saf
Share
1
Please type in your comments in English.
The comments that contain insults or libel to individuals, ethnicities, or contradictions with the laws of the country and religious teachings will not be disclosed