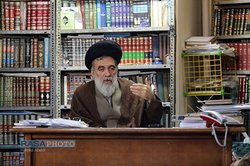 Hujjat al-Islam Hoseyni-Khorasani emphasized that the steadfastness and decisive ‎management of the Supreme Leader and the insight and vigilance of the people are two ‎important factors in thwarting the seditions and conspiracies of the enemies.‎

RNA – In an exclusive interview with Rasa News Agency, Hujjat al-Islam Sayyed Ahmad ‎Hoseyni-Khorasani, the representative of the people of Khorasan Razavi province in the ‎Assembly of Experts, referred to the necessity for the epic and passionate presence of ‎the people in the 9th of Dey [December 30th] demonstrations, which marks the ‎anniversary of the date when millions of people went to the streets on December 30, ‎‎2009 to demonstrate their support for the Islamic establishment after the post-election ‎riots.‎

The member of the Society of Seminary Teachers of Qom said, “The faithful and ‎revolutionary epic presence of the people on December 30th, 2009, along with their tact ‎and insight, blinding of the sedition, protecting of the security of the country, defence ‎of the values and aspirations of the Islamic Revolution, preservation of the valuable ‎achievements of the sacred blood of martyrs and the victory and help of the Supreme ‎Leader of the Islamic Revolution [Ayatollah Khamenei] was a turning point which must ‎never be forgotten.”‎
‎ ‎
He added, “On December 30th, 2009, the revolutionary insight of the people and their ‎vigilant and timely presence on the battlefield in defence of the Islamic Revolution and ‎the wise management of the Supreme Leader were the most important factors in ‎thwarting the complex plot of the enemies.” ‎

Hujjat al-Islam Hoseyni-Khorasani noted, “Today, in order to safeguard the country’s ‎security and overcome the steep political, social and cultural paths and to continue on ‎the path to the highest peaks of dignity and honour, we must protect the unity ‎between the ummah and the Imam.”‎
‎ ‎
His Eminence emphasized, “Today, the known and unknown factors by the ‎conspiratorial enemies and sometimes ignorant allies who are trying to distort, cool or ‎weaken the relationship between the Imam and the ummah must be identified and ‎exposed.”‎

He said that the tact of the Supreme Leader and the insight of the people in thwarting ‎the November plots came to the rescue of the country, the people, the system and the ‎Islamic Revolution and added, “On the anniversary of the December 30th, the ‎revolutionary and widespread presence of different sections of the people of the ‎country will make the enemies desperate and frustrated and incapacitates the plotting ‎of their agents.”‎

In conclusion, Hujjat al-Islam Hoseyni-Khorasani emphasized that the steadfastness and ‎decisive management of the Supreme Leader and the insight and vigilance of the people ‎are two important factors in thwarting the seditions and conspiracies of the enemies ‎and are two important elements in advancing the Islamic Revolution and overcoming ‎the crises.”‎
‎
Rasa News Agency