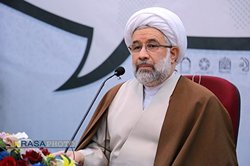 Hujjat al-Islam Abbasi explained that the reconstruction and revival of Islamic ‎civilization is the most important goal of the Islamic Revolution and added, “The unity ‎of the Muslim nations is the foundation of Islamic civilization.”‎

RNA – Speaking at the opening ceremony of the International Conference on Cultural ‎Dialogue on the Perspective of the Civilization of Iran and the Arab World held at the ‎Research Institute for Islamic Culture and Thought in Qom, Hujjat al-Islam Dr. Ali ‎Abbasi said, “Today we need more cultural dialogue than ever before.”‎

The rector of al-Mustafa International University continued, “At a time when division is ‎emphasized and groups are trying to stir up conflicts, it’s thanks to the people who ‎planned this important issue, namely cultural dialogue between Iran and the Arab ‎world, with the vision of a modern Islamic civilization because, along with the formal ‎communication between Iran and our brotherly countries, strengthening entry into this ‎dialogue and cultural and scientific diplomacy is a necessity.” ‎

He emphasized that the colonial powers have imposed a “new civilization” on the ‎Islamic world that differs from the common intellectual foundations of the people of the ‎region. This has led to serious alienation with the former civilization in the region ‎because of the imposition of humanism against theism, a profit-oriented and ‎individualistic ideology as well as the separation of religion from the public realm.‎

His Eminence argued that the creation of division is one of the negative effects of the ‎new civilization and said, “The colonial masters attempted to separate the components ‎of the Islamic civilization by creating false identities and they created contradictory ‎identities for the Arab, Turkish, and Iranian ethnicities which caused large components ‎to become small in comparison to each other and today, we are still witnessing such ‎cultural action.”‎
‎ ‎
He continued, “For two centuries, there has been some awakening among Muslims to ‎return to civilized identity and scholars have understood this pain and tried to bring the ‎Muslim nations back to their former civilization. The Islamic Revolution of Iran is a ‎turning point in rebuilding Islamic civilization in accordance with the needs of the time.”‎

The Iranian scholar also referred to efforts to create division in the Muslim world and ‎said, “The Takfiri conspiracy isn’t a small conspiracy and they assumed that they could ‎ensnare the Islamic world for dozens of years and that this would have many negative ‎consequences for the region. However, we have not been completely freed from the ‎Takfiri conspiracy and it’s still being pursued in the Muslim world in order to fuel ‎pessimism.” ‎

Hujjat al-Islam Abbasi added, “The Takfiri ideology is a major obstacle to the creation ‎of a new Islamic civilization because an ideology which doesn’t tolerate its Muslim ‎brothers and sisters can’t build civilization with a global approach but rather, the ‎condition for the creation of civilization is the emphasis on human values. How can one ‎who can’t tolerate the followers of his own religion claim to be the creator of a ‎civilization?”‎

Tags: Abbasi Takfiri Civilization Colonialism
Short Link rasanews.ir/201sZ9
Share
1
Please type in your comments in English.
The comments that contain insults or libel to individuals, ethnicities, or contradictions with the laws of the country and religious teachings will not be disclosed