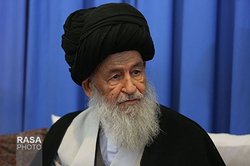 The prominent teacher in the Islamic Seminary of Qom referred to the enemies’ ‎attempts to promote deviant sects in Islamic society and emphasized the necessity of ‎teaching the Shi’ah beliefs and theology to the youth.‎

RNA – Speaking to a group of members of the Critique and Review of Baha’ism Group, ‎Grand Ayatollah Mohammad-Ali Alavi-Gorgani emphasized on a comprehensive ‎confrontation against false beliefs and sects and stated, “We must always strengthen ‎our strongholds against false religions and not let our children to be deviated.”‎

The prominent teacher in the Islamic Seminary of Qom referred to the widespread ‎efforts by deviated sects, such as Baha’ism, and said, “During all ages there have been ‎deviated sects and they also exist in the present time. Even during the time of the ‎beloved Prophet Muhammad, there are some individuals who made claims of ‎prophethood or other claims and misled people.” ‎

Ayatollah Alavi-Gorgani emphasized, “Human beings never become calm and there are ‎always those who seek to deviate society and it’s our duty to not to allow our children ‎to be deviated. For this reason, I believe the best way to succeed in this path is to be ‎properly educated and if we speak with logic, it has much greater influence.”‎

In another part of his remarks, His Eminence referred to the verse of the Holy Quran: ‎‎“Say, ‘Produce your evidence, should you be truthful’” [2:111] and mentioned, “The ‎Holy Quran tells the disbelievers and those who have deviated from the path of ‎righteousness that if they speak truthfully, they must explain with proof and logic. The ‎fact is that if we can move forward with reason and logic, no one can speak and ‎question and undermine the basic tenets of our religion.”‎

He pointed to the need to invest in the younger generation and the need for financial ‎support from institutions for this purpose and added, “We need to create defences for ‎our beliefs among our children and explain deviated sects, such as Wahhabism and ‎Baha’ism, to the youth in order to prevent them from going astray in the future.”‎
‎ ‎
Ayatollah Alavi-Gorgani noted, “At the beginning of the Islamic Revolution, we formed ‎a group in Tehran and explained these issues to them during a series of ideological, ‎scientific and theological discussions until they reached a point themselves and later ‎when the Tudeh Party sought to divert the youth in Tehran, we sent the same educated ‎individuals to counter them at the request of Imam Khomeyni and they made many ‎successes.”‎
‎
Rasa News Agency

Tags: Alavi Gorgani Bahai Wahhabi
Short Link rasanews.ir/201sZ6
Share
2
Please type in your comments in English.
The comments that contain insults or libel to individuals, ethnicities, or contradictions with the laws of the country and religious teachings will not be disclosed