The seminary and university systems must be united against the enemies 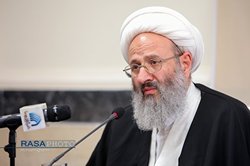 RNA – In his ethics and exegesis lesson held at Qom’s Ayatollah Golpaygani Seminary, ‎Ayatollah Mohsen Faqihi, a member of the Society of Seminary ‎Teachers of Qom, ‎commemorated Seminary and University Unity Week and in regard to the sedition of Jews ‎and Zionists in the Islamic ummah, he said, “The program of the Jews and Zionists is to ‎create dissension.” ‎

The head of the Dar al-Thaqalayn Wali al-Asr Institute ‎added, “Today, we see how the ‎Zionists have used recent issues in countries, such as Iraq, and create divisions between Iraq ‎and Iran and Muslims. Zionists and the arrogant powers are trying to create dissension in ‎Iran through their influence as well.”‎
‎ ‎
Ayatollah Faqihi referred to the enemies’ attempts to create dissension and disagreement ‎between the seminary and university systems in Iran and said, “We must strive so that the ‎seminary and university systems are united and defeat the enemies and those who seek to ‎create dissension. The statements that create dissension between the seminary and ‎university systems and between the seminarians and the people are caused by the intruders ‎and enemies.”‎
‎ ‎
He continued, “Our statements and activities must create hope and eliminate differences and ‎duality. The enemies want to disappoint the people and make people regret the past and ‎not hope for the future in order to shake the Islamic Revolution but the people have insight ‎and don’t allow the enemies to execute their plan.”‎

Tags: Faqihi Seminary University Qom
Short Link rasanews.ir/201sZ5
Share
1
Please type in your comments in English.
The comments that contain insults or libel to individuals, ethnicities, or contradictions with the laws of the country and religious teachings will not be disclosed