American petrodollars and support have kept Wahhabism up 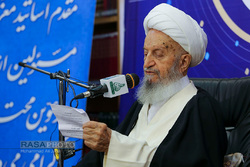 The revered source of emulation considered Takfiri movements to be the product of the ‎Takfiris and Wahhabis ideology and insisted that they would have disappeared had it not ‎been for American petrodollars and support.‎

RNA – Grand Ayatollah Naser Makarem-Shirazi met with members of the Association of ‎Activists Criticizing Wahhabism held at Qom’s Imam al-Sajjad Seminary and said that the ‎Islamic Seminaries are awake in opposition to the threat of Takfirism and Wahhabism.‎

The revered source of emulation emphasized that the threat of Takfirism and Wahhabism ‎isn’t limited to ‎Shi’ahs and added, “Daesh was the product of Wahhabism and it poses a ‎threat to all of humanity.”‎
‎ ‎
He emphasized that the threat of Takfirism and Wahhabism is against all of humanity and ‎stated, “At the same time, one must wake up the Muslims that the Takfiris and Wahhabis ‎aren’t the only enemies of the Shi’ahs and followers of the Ahl al-Bayt.”‎
‎ ‎
Ayatollah Makarem-Shirazi emphasized, “As the facts have become clear ‎to many people ‎around the world today, it has become easier to combat this ideology than ‎before.‎"‎

His Eminence considered the Takfiri and Wahhabi scholars to be at a very low level and ‎described his discussions with some Wahhabi scholars in Saudi Arabia and said, “We ‎discussed issues with them in Madinah and they couldn’t provide an answer to any of ‎issues.”‎
‏ ‏
He said that the method of Takfiri and Wahhabi argumentation is selecting verses from the ‎‎Holy Quran and noted, “Wahhabis only resort to verses that are ‎in accordance with their ‎goals and desires, leaving out the rest of the verses.”‎
‎ ‎
Referring to the baseless Wahhabi claim that the Shi’ahs believe in the ‎distortion of the Holy ‎Quran, Ayatollah Makarem-Shirazi stated, “The fact that the Quran hasn’t been distorted is ‎heavily emphasized in our exegeses and ‎books. Whenever we provide proofs and answer ‎their questions, again they are ‎stubborn and insist on their false claims.‎”‎
‎ ‎
In another part of his remarks, the renowned teacher in the Islamic Seminaries of Qom ‎emphasized ‎that the end of Wahhabism is near and added, “If it weren't for petrodollars and ‎American support, they would have disappeared. The end of Wahhabism is a reality, their ‎survival is due to support and petrodollars.”‎

He considered it as the scholars’ duty to be a border guard between the religion and the ‎beliefs of the people and to safeguard the school of the Ahl al-Bayt and said, “Wahhabis ‎want to stir up the minds and thoughts of people in regard to Shi’ahs and the followers of ‎the Ahl al-Bayt by faking a series of lies and one must be very careful in this regard.”‎
‎ ‎
Ayatollah Makarem-Shirazi called the cultural struggle against ‎Takfirism as a priority over the ‎military struggle and said, “If the Takfiri ideology is challenged, it ‎would be much easier to ‎fight them militarily and physically.‎ Of course, the Takfiris today are extremely weak in ‎various fields.”‎

Tags: Makarem Shirazi Takfiri Wahhabi Shia
Short Link rasanews.ir/201sZ4
Share
1
Please type in your comments in English.
The comments that contain insults or libel to individuals, ethnicities, or contradictions with the laws of the country and religious teachings will not be disclosed