Jurisprudence and ijtihad rest upon piety 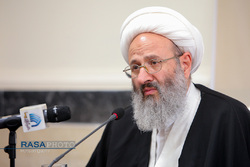 The renowned teacher of jurisprudence in the Islamic Seminary of Qom said, “Many ‎scholars of jurisprudence didn’t achieve anything because they lacked piety but piety ‎alone can’t be enough. For this reason, it’s necessary for the evolution of jurisprudence ‎and ijtihad to include knowledge as well as piety.”‎

RNA – In an exclusive interview with Rasa News Agency, Ayatollah Mohsen Faqihi, a ‎member of the Society of Seminary Teachers of Qom, expressed his opinion on the ‎situation of ethics in the Islamic Seminaries as religious scholars linked to the Islamic ‎Seminaries have long had a fundamental approach to self-purification and the science of ‎ethics. The teaching of Islamic ethics is an important pillar alongside learning religious ‎rulings and theology.‎

In this regard, the head of the Dar al-Thaqalayn Wali al-Asr Institute said, “The issues ‎of the Islamic Seminaries, the science of jurisprudence and ijtihad are different from ‎other sciences. That that which is important in all sciences is that knowledge elevates a ‎person and the one who is more knowledgeable becomes a specialist and can find a ‎lofty position.”‎

Tags: Faqihi Seminary Jurisprudence
Short Link rasanews.ir/201sYd
Share
1
Please type in your comments in English.
The comments that contain insults or libel to individuals, ethnicities, or contradictions with the laws of the country and religious teachings will not be disclosed