With gasoline riots, the enemies sought to prevent 22 Bahman rallies and upcoming elections 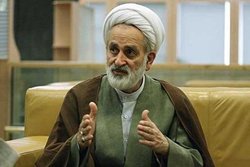 Hujjat al-Islam Salek-Kashani said, “The enemies were trying to prevent the 22 Bahman ‎rallies and the holding of parliamentary elections by creating the recent sedition in Iran.”‎

RNA – Speaking at the 14th National Conference of Cultural Headquarters of the Dawn of the ‎Islamic Revolution entitled “The Second Phase of the Islamic Revolution in Self-Building, ‎Socialization and Civilization,” Hujjat al-Islam Ahmad Salek-Kashani, the vice-president of the ‎Cultural Committee of the Islamic Consultative Assembly, said, “In the Statement on the ‎Second Phase of the Islamic Revolution, the Supreme Leader of the Islamic Revolution ‎‎[Ayatollah Khamenei] has described two strategies of conflict between the Islamic world and ‎the arrogant powers as well as empathy and harmony between Muslims.”‎
‎ ‎
The representative of the people of Esfahan in the Islamic Consultative Assembly said that ‎the Islamic world will prevail over the arrogant powers on the basis of the divine promise ‎and added, “Today, it’s no longer about the West and the East, but the Islamic world against ‎the front of international disbelief.”‎
‎ ‎
He stated that over the last forty years we have gone through five major seditious events ‎and said, “The latest seditious event by the enemies was the gasoline sedition that was ‎created by the mistakes of some officials and by riding the wave of the enemies. Today, the ‎perpetrators of these events must be responsible for the blood that was shed and the ‎damage caused.”‎
‎ ‎
Hujjat al-Islam Salek-Kashani noted, “The enemies were trying to prevent the 22 Bahman ‎rallies [marking the Anniversary of the Islamic Revolution] and the holding of the [upcoming] ‎parliamentary elections by creating the recent sedition in Iran but this sedition had a ‎premature delivery and revealed their hands to everyone.”‎
‎ ‎
His Eminence cited the efforts of the United States to prevent the continuation of the Islamic ‎Revolution and said, “The Statement on the Second Phase of the Islamic Revolution was ‎issued when John Bolton [former US National Security Advisor] and Donald Trump [US ‎President] announced that Iran wouldn’t see the fortieth anniversary of the Islamic ‎Revolution. However, we witnessed that none of their plots achieved fruition.”‎

He emphasized that in the Statement on the Second Phase of the Islamic Revolution, the ‎Supreme Leader said that the Islamic Revolution will never be eliminated despite the ‎enemies’ animosity and added, “The enemies can never destroy us with their own efforts but ‎it must be known that the internal decay within the system is the greatest affliction to the ‎Islamic Revolution and we must not allow this issue to be caused by the loss of unity and ‎empathy.”‎
‎ ‎
Hujjat al-Islam Salek-Kashani emphasized that the positions of the Supreme Leader blinded ‎the sedition over the increased price of gasoline and said, “He came forth to protect the ‎Islamic system and strengthen the intra-organizational strength to protect the Islamic system ‎and freedom-seeking movements in the world. In the hard battle between pure Islam and ‎the arrogant powers, he sidelined the front of international disbelief, demonstrated nobility to ‎the arrogant powers and ensured the security of the country.”‎
‎ ‎
In conclusion, he noted, “If the Supreme Leader didn’t support the decision of the chiefs of ‎the government, the riots would have been validated, the pillars of the system would have ‎been discredited and the United States and its allies and internal opposition movements ‎would have been made happy.”‎

Tags: Salek Gasoline Riots Iran Khamenei Second Phase
Short Link rasanews.ir/201sXF
Share
1
Please type in your comments in English.
The comments that contain insults or libel to individuals, ethnicities, or contradictions with the laws of the country and religious teachings will not be disclosed