If we are united, the enemies cannot harm us 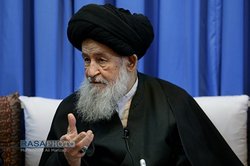 The prominent teacher in the Islamic Seminary of Qom described the formation of the ‎Islamic Revolution as due to the mass movement of the people and the help of the late ‎Imam Khomeyni and said, “If we are one nation, the enemies cannot harm us.”‎

RNA – On December 11th, Ayatollah Mohammad-Ali Alavi-Gorgani, a prominent teacher in the ‎Islamic Seminary of Qom, met with a group of soldiers and commanders of the Mechanized ‎Brigade of the 20th of Ramadhan in Qom and said that one of the religious commandments ‎is self-awareness and said, “Man must see how he acts throughout his life and if he’s on the ‎right track or not.”‎
‎ ‎
His Eminence added, “Education can be a valuable asset that can guide others if it is pursued ‎on the path of truth and if man is vigilant over himself.” ‎

He said, “All of you can be missionaries of religion if you have perfected your personality. ‎Just as it’s stated in the noble narration of Imam Ja’far al-Sadiq, there are three classes for ‎human growth: ‘Anyone who learns something, practices it and teaches it to others, will be ‎referred to as a jurist in the heavens.’”‎
‎ ‎
Ayatollah Alavi-Gorgani emphasized the necessity of cooperating and helping others and not ‎forgetting our own people and said, “The philosophy of God giving man two hands is that he ‎can take with one hand and give with the other hand and help others. If we do this, our ‎society will become a utopian and virtuous society.”‎

Referring to the Islamic Revolution, the renowned source of emulation stated, “Our ‎revolution was taken from this concept. The late Imam Khomeyni himself was alone but ‎when the people made a move, they conveyed the message to the rest of the country and ‎then, the whole country began to move and the superpowers of the East and the West were ‎moved aside.”‎

He stressed, “One could not offer the late Shah [Mohammad-Reza Pahlavi] the least amount ‎of criticism but when our people were beside the late Imam and the whole nation was ‎united, the enemies also realized that they couldn’t do anything because ‘God’s hand (of ‎protection) is on protecting unity.’”‎
‎ ‎
In conclusion, Ayatollah Alavi-Gorgani said, “Your duty is first to reach out and reform your ‎self, because in this manner, your faith will be strong and no one will be able to harm you, ‎and then in acting upon it, you must not be heedless of others and you must strive to ‎protect the achievements of the Islamic Revolution.”
‎
Rasa News Agency

Tags: Alavi Khomeyni Islamic Revolution Iran
Short Link rasanews.ir/201sWg
Share
0
Please type in your comments in English.
The comments that contain insults or libel to individuals, ethnicities, or contradictions with the laws of the country and religious teachings will not be disclosed