Rioting isn’t compatible with the logic of protesting 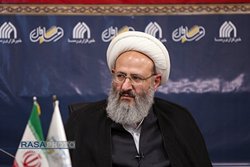 The member of Society of Seminary Teachers of Qom explained that rioting, evil and ‎aggression aren’t compatible with the logic of protesting ‎added, “We hope that people ‎will not allow those who are against the Islamic Revolution to exploit and ride the wave ‎of protests.”

RNA – In an exclusive interview with Rasa News Agency, Ayatollah Mohsen Faqihi, a ‎member of Society of Seminary Teachers of Qom, referred to the statements of the ‎Supreme Leader of the Islamic Revolution (Ayatollah Khamenei) regarding the recent ‎protests in Iran and said, “In all the levels and issues of the system,‎‏ ‏we must complied ‎with the law.”‎

The head of the Dar al-Thaqalayn Wali al-Asr Institute added, “The Supreme Leader has ‎always stressed on the observance of the law. If the heads of the three levels of ‎government have approved a law, their decision must be respected. If the protests ‎follow the law, there is no problem but destruction, evil and the damaging of private ‎and public property must not occur.”‎

He expressed regret that the destruction and the setting on fire of private and public ‎property by rioters and noted, “Destruction and rioting are against religious and ‎national law. The people can pursue their peaceful protests through the confines of the ‎law.”‎
‎ ‎
Ayatollah Faqihi said, “The people must be careful so that the enemies don’t exploit the ‎protests. Today, we see today that the hypocrites, Reza Pahlavi, those against the ‎Islamic Revolution and the enemies are taking advantage of the protests of the people ‎and seek to surf the wave of protests. Just as the late Imam Khomeyni said, ‘the‏ ‏people ‎must know that if the enemies approve or pursues an act, it’s against the interests of ‎the people and the system.’”‎

His Eminence said that the enemies are encouraging and influencing the protesters in ‎Iran and said, “The enemies and ill-wishers are trying to eliminate the positive and ‎peaceful aspects of the protests and exploit the atmosphere of protests.”‎

Ayatollah Faqihi ‎referred to the aggression and insults of the rioters and miscreants ‎toward seminarians and scholars said, “Everyone must note that the increase of the ‎price of fuel is the decision of the heads of the government and seminarians don’t have ‎a role in the increased price of gasoline.” ‎