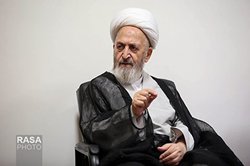 RNA – Speaking at the 21st meeting of teachers of advanced and graduate level studies ‎in the Islamic Seminaries of Qom held at Imam Khomeyni Specialized University, ‎Ayatollah Jafar Sobhani said the Holy Quran introduces the Prophet Muhammad as a ‎proof and added, “The Prophet Muhammad’s morality and the fact that he was ‎uneducated is the proof of his truthfulness and legitimacy and doesn’t require any other ‎proof.” ‎

The prominent teacher in Islamic Seminaries of Qom stated out that the truthfulness of ‎the Quran must be explained in society and said, “The Holy Quran shows the path of ‎happiness and adversity.”‎

His Eminence pointed out that one of the other effects of the Islamic Revolution is the ‎approximation between denominations and sects of Islam and the consideration of ‎commonalities and said, “There must not be any exaggeration and overestimation in ‎approximation and it is wrong to combine religions.”‎
‎ ‎
He added, “The Islamic Revolution has cut the hands of looters from the country off ‎and that is why the looters are hostile to us.”‎
‎ ‎
Ayatollah Sobhani said that after the Islamic Revolution, the Islamic Seminaries revived ‎the forsaken sciences and added, “Scientific principles such as jurisprudence, ‎memorization of the Quran and scholarship must be taught in every sense.”‎

The revered source of emulation said that jurisprudence and the principles of jurisprudence were the main elements ‎of Shi’ah teachings and noted, “The Islamic Seminaries must maintain their ‎independence.”‎

Ayatollah Sobhani added, “The Islamic Seminaries must separate the two sciences of ‎jurisprudence and propagation because today the need for missionaries in the country is ‎seriously felt.”‎