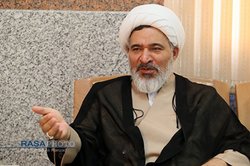 The director of the Islamic Seminaries for Women Throughout Iran said, “Certainly, all of us ‎agree that one of the main strategies of the enemies to extinguish the lamp and the blazing ‎torch of Islam is to use and take advantage of women.”‎

Hujjat al-Islam Abdolkarim Bahjatpour, the director of the Islamic Seminaries for Women ‎Throughout Iran, offered his congratulations on the occasion of Islamic Unity Week and ‎said, “In the current era, there are evil hands who are not interested in us unless they can ‎rule over us and thus, they are trying to divide Shi’ahs and Sunnis.”‎

The scholar and researcher of Quranic Sciences said, “Certainly, all of us agree that one of ‎the main strategies of the enemies to extinguish the lamp and the blazing torch of Islam is ‎to use and take advantage of women. Nothing can ever kill the warrior spirit in the country ‎and nothing can extinguish the striving of the men on the battlefield.” ‎

Noting that some people don’t take the position of women seriously, he said, “Those who ‎fail to understand the role of women in reforming society and corruption and see them as ‎mere playthings for speaking in the social area will certainly fail. Therefore, this element ‎must certainly be brought to the fore.”‎

Emphasizing that the enemies seek to use the great capacity of women to harm Islam, ‎Hujjat al-Islam Bahjatpour said, “The enemies are aware of the passion of their emotions, ‎sensitivities and management and they precisely plot and plan from the point that women ‎can grow and enlarge their great personalities.” ‎

His Eminence added, “In the Islamic holy system, competent and worthy women definitely ‎must come to the fore. In this arena, art can provide a good opportunity for the social ‎presence of women, however to the level which Islam permits and by observing all due ‎respect and boundaries, these must be properly protected.”‎

In other remarks, he added, “In regard to the Statement on the Second Phase of the Islamic ‎Revolution, whatever the Supreme Leader of the Islamic Revolution [Ayatollah Khamenei] ‎said regarding the harms of the first phase, a large part of it was that we didn’t understand ‎the capacities of religion well and when we didn’t bring them to the fore. Whenever we didn’t ‎achieve our goals to the expected level, there was a place where we could not have been ‎able to use the religious motives to make society move.” ‎

Hujjat al-Islam Bahjatpour said, “We had a lot of problems in the first forty years of the ‎Islamic Revolution and for this reason, we were weak in achieving our goals to the expected ‎level but we've made great progress despite sacrificing our lives and property for the Islamic ‎system.” ‎