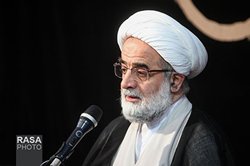 The custodian of Tehran’s Marvi Seminary described the holding of gatherings in which those ‎personalities which are held in esteem by the Sunnis are cursed is an innovation of “English ‎Shi’ahs” in order to lower the dignity of the Shi’ahs and to create enmity between Muslims.‎

RNA – Speaking at his weekly class on Islamic ethics at Tehran’s Mo’ayer Seminary on the ‎topic of “Imam al-Sadiq’s Educational and Ethical Advice to Abdullah ibn Jundab,” Ayatollah ‎Mohammad-Baqir Tahriri, the custodian of Tehran’s Marvi Seminary, said that through their ‎good character and ethics, the Infallible Imams were influential, even in the hearts of the ‎enemies and added, “The enemies were constantly trying to destroy the personality of the ‎Infallible Imams with thousands of plans and tricks but their plans were always defeated.” ‎

The renowned scholar commented on the gatherings that are held in the name of bara’ah ‎‎(dissociation), saying, “When holding such gatherings, it’s necessary to pay attention to the ‎lifestyle of the Ahl al-Bayt and the requirements of the Islamic Revolution and to separate ‎oneself from those people who depart from these two axes.”‎

Ayatollah Tahriri added, “In the lifestyle of the Ahl al-Bayt, we see that these nobles had a ‎good relationship with Sunnis and advised the Shi’ahs to attend their funerals, visit their ill ‎patients and pay their rights. This issue isn’t only limited to a specific time in the past and ‎today, it must also be taken into consideration.”‎

Ayatollah Tahriri described the holding of gatherings in which those personalities which are ‎held in esteem by the Sunnis are cursed is an innovation of “English Shi’ahs” in order to lower ‎the dignity of the Shi’ahs and to create enmity between Muslims and said, “The destruction ‎of the unity of the Islamic Ummah is one of the most important goals of the ‘English Shi’ahs’ ‎in the holding of such gatherings.”‎