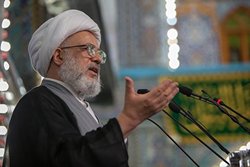 RNA – During his Friday prayer sermon delivered to a large and fervent crowd of believers in ‎the Iraqi holy city of Karbala’s Holy Shrine of Imam al-Husayn, Hujjat al-Islam Abdul-Mahdi ‎al-Karbala’i said, “Real reform and change in the country has to be through peaceful ‎methods.”‎

The representative of Grand Ayatollah Sayyid Ali al-Sistani in Karbala said that security forces ‎must not allow attacks on public and private property, must ensure the safety of the rallies, ‎and stay away from violence.‎

He also urged the demonstrators to avoid vandalizing the public properties, describing any ‎act of vandalism as “illegal and illegitimate.”‎

Hujjat al-Islam al-Karbala’i said that protesters should be aware of infiltration of suspicious ‎elements, trying to exploit the rightful demands of protesters.‎

He also said that true reform is only possible through unity and cooperation.‎

Thousands of Iraqi protesters have massed near the high-security Green Zone in Baghdad in ‎a resumption of anti-government demonstrations that left more than 150 people dead earlier ‎this month.‎

The Friday rallies have also left one protester killed and 224 others wounded, according to al-‎Sumaria News, citing the High Commission for Human Rights of Iraq.‎

The fresh demonstrations come after Prime Minister Adil Abdul-Mahdi pledged more reforms ‎aimed at improving economy. The premier said people are free to exercise their right to ‎demonstrate, but violence would not be tolerated.‎

Addressing the nation on Thursday night, Abdul-Mahdi said people had the right to call for ‎the government to resign.‎

However, a collapse of the government, as some protesters have suggested, won’t help ‎improve the situation in the Arab country, he said.‎

‎“The resignation of the government today without a constitutional alternative will lead the ‎country into chaos,” he said.‎

A government committee established by Abdul-Mahdi reported on Monday that 149 civilians ‎were killed in the first round of the protests due to the use of excessive force and live bullets ‎by security officers.‎

Tags: Sistani Karbala Karbalai
Short Link rasanews.ir/201sQt
Share
0
Please type in your comments in English.
The comments that contain insults or libel to individuals, ethnicities, or contradictions with the laws of the country and religious teachings will not be disclosed