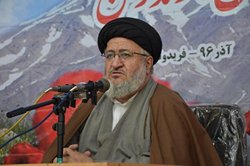 Hujjat al-Islam Jalali noted that the enemies’ isolation of Islamic Iran through sanctions and ‎political pressures is a failed plan and said, “Today, Islamic Iran is an undisputed power in ‎the region and in the world.” ‎

RNA – Speaking at a gathering of seminarians and students in Sari, Mazandaran, Hujjat al-‎Islam Sayyed Mahmoud Jalali, the vice president of the Seminary Council of Mazandaran, ‎said that resistance against the enemies has been the key to the victory of Iran’s Islamic ‎system of government in various sectors over the past forty years.‎

The teacher in the Islamic Seminary of Mazandaran added that just as the Supreme Leader ‎of the Islamic Revolution [Ayatollah Khamenei] has said that not surrendering to the United ‎States is a divine duty, adding, “The neutralization of the enemies’ conspiracies will only be ‎realized with the persistence and resistance of the Iranian people.”‎
‎ ‎
He noted that retreating and giving in to the enemies’ desires led to them having greater ‎influence and boldness and added, “Our forty years of experience have shown that we have ‎always stood strongly against the enemies’ excesses.” ‎

Hujjat al-Islam Jalali said that the enemies are seeking to isolate Islamic Iran in the ‎international community and noted, “Over the last forty years Islamic Iran has taken ‎practical initiatives to become one of the major players in the region as well as the world.” ‎

His Eminence stressed that the isolation of Islamic Iran through sanctions and political ‎pressures was a defeated plan and stated, “Today, Islamic Iran has become an undisputed ‎regional and international power.”‎
‎ ‎
He described the Western countries led by the United States as the enemies of the Iranian ‎people and said, “Today, it has become increasingly clear that there is no difference ‎between the United States and Europe in terms of hostility to the great Iranian nation.”‎
‎ ‎
Hujjat al-Islam Jalali emphasized that Europeans also continue the same path of the ‎Americans in imposing pressure and hostility against the Iranian people and said, “Just as the ‎Supreme Leader emphasized, ‘We must completely cut off all hope in the Europeans.’”‎

Tags: Iran USA Europe Sanctions
Short Link rasanews.ir/201sQK
Share
0
Please type in your comments in English.
The comments that contain insults or libel to individuals, ethnicities, or contradictions with the laws of the country and religious teachings will not be disclosed