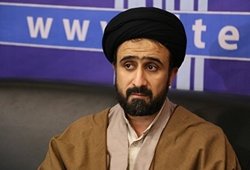 Hujjat al-Islam Hashemian said, “The realization of the reappearance of Imam al-Mahdi ‎requires that the culture of Arba’in is extended to the entire year and every place.‎"‎

RNA – Speaking at a meeting attended by staff of the Baqir al-Uloum University and the ‎Imam Reza Institute, Hujjat al-Islam Sayyed Mohammad-Hoseyn Hashemian, a member of ‎the faculty of social sciences, referred to the presence of millions of pilgrims in the Arba’in ‎pilgrimage to the Holy Shrine of Imam al-Husayn in the Iraqi city of Karbala and said, “The ‎presence of pilgrims from different countries, cultures and religions in the Arba’in pilgrimage ‎marks the foundation of a new Islamic civilization and the prelude to the reappearance of ‎Imam al-Mahdi.”‎

Hujjat al-Islam Hashemian said that some people observe religious rituals only during ‎Muharram or engage in fasting and prayer only during Ramadhan, while in a hadith, Imam ‎Musa al-Kadhim warned us against taking religion as something temporary and seasonal: “Oh ‎God, do not include me among those whose beliefs are temporary.”‎

His Eminence said that extremism in religiosity is a form of harm, said, “Today, the arrogant ‎powers of the world use different sects and extremists, such as Daesh, to oppress pure ‎Islam, while the Prophet Muhammad invited the people toward to moderation because ‎extremism in religiosity detracts from the principles and entertains secondary issues.”‎

Hujjat al-Islam Hashemian considered the decline in moral values in society as a another ‎harm, and stated, “Religiosity has two wings, religious rituals and obeisance and worship, ‎which are very important, but incomplete. Therefore, the second dimension is the increase ‎of religious knowledge and the spread of ethics in society.”‎