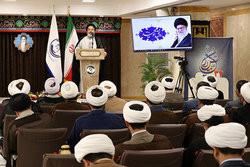 Hujjat al-Islam Navvab said, “Arba’in is a symbol of Resistance Islam and Shi’ah Islam and is ‎the embodiment of the rituals of this school of thought.”‎

RNA – Speaking at the 45th conference of the managers of the Centre for the ‎Services of the Islamic Seminaries on October 2nd, Hujjat al-Islam Sayyed Abolhasan Navvab ‎referred to the history of the expansion of Shi’ah Islam and the importance of the Arba’in ‎pilgrimage.‎

The head of the board of directors of the Centre for the Services of the Islamic Seminaries in ‎Qom said that before the victory of the Islamic Revolution in 1979, the name of Shi’ism didn’t ‎exist in many countries of the world and added, “After the Islamic Revolution, Shi’ism was ‎propounded in the world. In countries such as Malaysia and Bosnia and Herzegovina, there ‎were no Shi’ahs and today it can be that there is no country where a tent hasn’t been ‎established in the memory of Imam al-Husayn.” ‎

Hujjat al-Islam Navvab said, “Shi’ism was propagated and spread during the time of the late ‎Imam Khomeini and the Supreme Leader of the Islamic Revolution [Ayatollah Khamenei]. The ‎late Imam promoted Shi’ism as pure Islam and the Supreme Leader promoted it as Resistance ‎Islam and today, Shi’ism is expounded as a superpower around the world and reveals itself to ‎the world.” ‎

His Eminence said, “Today, the Shi’ah have Hezbollah and Ansarullah and gradually Resistance ‎Islam demonstrates itself as a power in the world.”‎
‎ ‎
Hujjat al-Islam Navvab said, “Arba’in is a symbol of Resistance Islam and Shi’ah Islam and is ‎the embodiment of the rituals of this school of thought.”‎