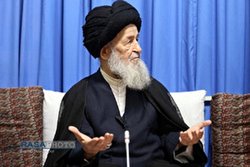 The teacher in the Islamic Seminaries referred to the need for truthfulness, especially among ‎the officials of the country and urged them to avoid exaggeration in their reports.‎

RNA – In a meeting with members of the central headquarters of the Khatam al-Anbiya ‎camp, Ayatollah Mohammad-Ali Alavi-Gorgani celebrated the services of this camp and ‎stated, “The point I want to make is not about your words but often officials make ‎exaggerations in their reports.”‎

The revered source of emulation emphasized on the necessity of telling the truth and said, ‎‎“Sometimes what is said may not be the whole of reality and for this reason, the Purified ‎Imams have also said, ‘When presenting a report, it’s possible to leave the path of truth and ‎justice.’”‎

He added, “This is even noted in the stages after one’s death because a hadith (narration) ‎says that when one’s body is buried in the grave, [the angels] Nakir and Munkar come and ‎ask the person to write down his good and bad deeds but this person only writes down his ‎good deeds and is ashamed of writing his bad deeds but when he realizes that the world ‎after death isn’t a place of hiding. He also writes down his bad deeds and these writings ‎accompany him until the Day of Resurrection.”‎

Ayatollah Alavi-Gorgani said, “We must always ask God that we won’t be ashamed on the ‎Day of Resurrection and therefore, we must do everything we can to tell the truth and raise ‎the facts.”‎

In another part of his speech, His Eminence referred to the third verse of Surah al-Ana’am ‎‎[“The Cattle”]: “He is God in the heavens and on the earth: He knows your secret and your ‎overt [matters]” and said, “This means that you shouldn’t look at yourself because God ‎knows whatever you did and has knowledge of whatever you have earned.” ‎

Referring to the necessity of doing the right thing and following the true path, especially for ‎the officials, he said, “We must act so that make sure that God accepts our deeds.”‎

Tags: Alavi Gorgani Khatam al-Anbiya
Short Link rasanews.ir/201sOB
Share
0
Please type in your comments in English.
The comments that contain insults or libel to individuals, ethnicities, or contradictions with the laws of the country and religious teachings will not be disclosed