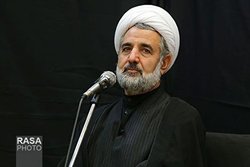 The chairman of the National Security and Foreign Policy Committee of the Islamic ‎‎Consultative Assembly said that if negotiations are to take place, the Iranian people will no ‎longer see happiness and added, “The United States is seeking to reduce Iran’s regional ‎influence and destroy its missile power.”‎

RNA – In an exclusive interview with Rasa News Agency, Hujjat al-Islam Mojtaba Zonnour, ‎the chairman of the National Security and Foreign Policy Committee of the Islamic ‎‎Consultative Assembly, referred to the power positions of the Supreme Leader of the ‎Islamic Revolution [Ayatollah Khamenei] in opposition to negotiations with the United States ‎and added, “If we look at the statements of the Supreme Leader in regard to negotiating ‎with the enemies, we know that no person or expert has addressed this issue and hasn’t ‎analyzed its angles like he has.”‎

Hujjat al-Islam Zonnour pointed out the consequences of negotiating with the United States ‎and added, “If we accept to negotiate with the United States, they will conclude that the ‎imposition of maximum pressure has had a positive effect to a certain degree and for this ‎reason, they always use the same policy to achieve their demands. In other words, ‎accepting to negotiate with the enemies leads to the idea that the enemies can always yield ‎to the Iranian people through maximum pressure.”‎

His Eminence emphasized that if negotiations are held, the Iranian nation will no longer see ‎happiness and said, “Negotiation means trading but the United States isn’t present at the ‎negotiating table for that purpose but has already set its goals and wants us to accept them. ‎For example, they have already determined that Iran’s regional influence and missile power ‎should be decreased and that their intention in negotiating is to dictate their goals and that ‎we accept each one of them.”‎