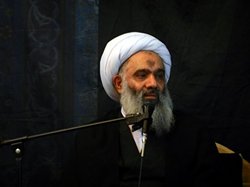 Hujjat al-Islam Farhani described the Islamic Revolution as a religious thought based on the ‎uprising of Ashura and emphasized that the enemies are afraid of the march of millions of ‎people in the Arba’in pilgrimage. ‎

RNA – Speaking at celebration of Sacred Defence Week in at Imam Sajjad Mosque in ‎Pardisan, Qom, Hujjat al-Islam Abdolkarim Farhani, the representative of the people of ‎Khuzestan province in the Assembly of Experts, referred to the great lessons of the tragedy ‎of Ashura and said, “Besides being a symbol of martyrdom, Imam al-Husayn has recorded ‎two other symbols in the history of Islam – the first is Tasu’a al-Husayn [the day night of ‎Muharram], which is the symbol of the resistance of Imam al-Husayn and his loyal ‎companions and the second symbol is Arba’in al-Husayn, which was established by Muslims ‎after the tragedy of Ashura.”‎

The teacher in the Islamic Seminaries noted that the slogan of Imam Khomeyni, the founder ‎of the Islamic Revolution, is the voice of Imam al-Husayn and stated, “On the afternoon of ‎Ashura [June 3, 1963] at Qom’s Feyziyeh Seminary, Imam Khomeyni declared that the ‎scholars must come to the aid of Islam.”‎

He added, “Imam Khomeyni was arrested, exiled and was stripped of his clerical clothes but ‎his students continued on his path, which was the school of resistance.”‎

Referring to Islamic Iran’s glorious revolution in the Islamic world, Hujjat al-Islam Farhani ‎stated, “In the last 200 years, Islamic Iran stood for the first time in the world with ‎resistance and with the culture of jihad and martyrdom.” ‎

He referred to the resistance of Lebanon’s Hezbollah against the arrogant powers of the ‎world said, “By adhering to Wilayat al-Faqih [Guardianship of the Jurisprudent] and through ‎resistance learned from the tragedy of Ashura, Sayyid Hasan Nasrallah [the Secretary-General ‎of Hezbollah] has resisted against the enemies in such a way that the enemies were ‎incapacitated through this resistance in the region.”‎

Hujjat al-Islam Farhani stated, “Today, due to the blessing of Arba’in and the resistance of ‎martyrs and soldiers of Islam, both Sunnis and Shi’ahs as well as Christians in Lebanon, are ‎committed to wilayah [guardianship] and this issue has achieved its intended objective ‎through the blood of the martyrs.”‎
‎ ‎
His Eminence said that the Arba’in pilgrimage is a symbol of Shi’ah thought and said, “Arba’in ‎al-Husayn is a symbol of Shi’ism and today the enemies are concerned with this divine ‎thought.”‎

In conclusion, he emphasized on the need to stand up to the enemies and said, “Negotiating ‎with American officials is a big mistake. Imam al-Husayn and Imam al-Sajjad have taught us ‎religious dignity and negotiating with the United States at the present time is against Islamic ‎dignity.”‎

0
0
Answer
very good
Please type in your comments in English.
The comments that contain insults or libel to individuals, ethnicities, or contradictions with the laws of the country and religious teachings will not be disclosed