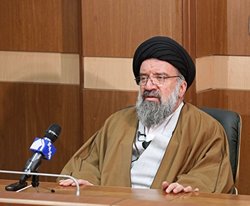 The speaker of the Assembly of Experts said that negotiating doesn’t solve the problems of ‎the country and added, “The only way to solve the country’s problems is through resistance ‎and negotiations won’t have any effect.” ‎

He added, “Over the past few days various meetings have been held. In one of these ‎meetings, Hujjat al-Islam Hoseyn Taeb [the head of the Intelligence Organization of the ‎Islamic Revolutionary Guard Corps] was present in the Assembly of Experts and spoke to ‎the members of this assembly.”‎

Ayatollah Khatami continued, “In addition to the Intelligence Organization of the IRGC, ‎Ayatollah Sayyed Ebrahim Raeisi [the Chief Justice of Iran] also addressed the Assembly of ‎Experts.”‎

He emphasized, “Nothing will come out of negotiations and on the eve of President Hasan ‎Rouhani’s visit to the 74th session of the United Nations General Assembly in New York, the ‎Europeans have shown their true selves and three European countries also have falsely ‎accused us which demonstrates that Europe and the United States are cut from the same ‎cloth. Therefore, we must adopt the same strategy of patience and resistance that is ‎emphasized in the Quran.” ‎

In response to a question about reforming the election law, Ayatollah Khatami said, “Election ‎law reform has many clauses that were discussed at the meeting but it didn’t get ‎anywhere. We must devise a plan to devote time to this specific issue in a meeting every ‎two days.”‎