Arba’in has become a moral, cultural and religious diplomacy 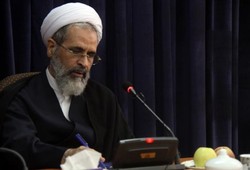 The director of the Islamic Seminaries of Iran emphasized the that Arba’in has become a ‎form of moral, cultural and theological diplomacy and emphasized the need for clarification ‎of the principles and charter of this diplomacy.‎

RNA – In a meeting with members of the Cultural and Educational Committee of the Arba’in ‎Headquarters, Ayatollah Alireza Arafi said, “The category of pilgrimage is a category that ‎exists alongside supplication and prayer in the form of two special wings in Islam and the ‎teachings of the Ahl al-Bayt, which are the cause of the growth and excellence of a believing ‎person.”‎

The director of the Islamic Seminaries of Iran noted, “Many of our teachings are in common ‎with other religions and denominations but there are also specializations‏ ‏and distinguishing ‎qualities, one of which is the issue of pilgrimage. The Shi’ah viewpoint is prominent in this ‎regard.”‎

He said, “Pilgrimage is in fact a means of connection to the path toward God. A characteristic ‎of the two gates – prayers and pilgrimage – is that all the truths of religion are manifested in ‎these two gates in a particular manner. These two gates are considered as the two wings of ‎the ‘way to God.’ In our sources, the issues are expressed in two parts – supplication and ‎pilgrimages – in an epic and passionate manner. All of these truths are accompanied by ‎spiritual passion and epic.”‎

Ayatollah Arafi emphasized the that the Arba’in pilgrimage has become a form of moral, ‎cultural and theological diplomacy and emphasized the need for clarification of the principles ‎and charter of this diplomacy.‎

His Eminence added, “The duty of the Arba’in Headquarters and the cultural department and ‎the seminary and its cultural apparatus is to make the passion and epic of the pilgrimage a ‎mirror and bring the demonstration of religious education to fruition.”‎

He said, “In this regard, we must have a comprehensive distribution of people in the Arba’in ‎pilgrimage. We must increase the participation other nations as one objective so that the ‎slogans of this great epic can be heard in different countries and gradually throughout the ‎entire world.”‎

Ayatollah Arafi added, “The presence of a colourful range of races, languages, ethnicities and ‎religions in the Arba’in pilgrimage will enhance the authentic Husayni discourse. Other ‎important points include the use of art in this great jihadi movement. Various kinds of arts ‎can be activated in this regard and there are many artists who want to play a role in this ‎regard.” ‎

In conclusion, he said, “We hope that this year, we will also create a spiritual epic in the ‎Arba’in pilgrimage and be fruitful in saving the Islamic world.”‎

Tags: Arafi Arbain Karbala Husayn
Short Link rasanews.ir/201sLg
Share
0
Please type in your comments in English.
The comments that contain insults or libel to individuals, ethnicities, or contradictions with the laws of the country and religious teachings will not be disclosed