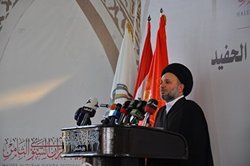 The son of Ayatollah Sayyid Muhammad-Sa’id al-Hakim considered the uprising of Hadhrat ‎Zayd ibn Ali as an extension of the movement of Imam al-Husayn in many matters and ‎goals.‎

RNA – According to Rasa News Agency’s correspondent in Najaf, Hujjat al-Islam Sayyid ‎Izzuddin al-Hakim, the son of the Ayatollah Sayyid Muhammad-Sa’id al-Hakim, delivered a ‎speech at the “Zayd ibn Ali: Halif al-Quran” [Ally of the Quran] Conference held in the Holy ‎Shrine of Hadhrat Zayd al-Shahid in the Iraqi city of al-Hillah and said, “The uprising of ‎Hadhrat Zayd ibn Ali was an extension of his grandfather’s movement, Imam al-Husayn, and ‎shared many issues and goals, and was related to the Ahl al-Bayt and the Shi’ahs.” ‎

Hadhrat Zayd ibn Ali [695-740 CE] was the son of Imam Ali ibn al-Husayn, and the great-‎grandson of Imam Ali. He led an unsuccessful revolt against the Umayyad Caliphate, in which ‎he died.‎

His Eminence called the Iraqi people the flag bearers of Shi’ism, and stated, “Today, the ‎Iraqi people are the harbingers of the two movements – the Husayni and Zaydi movements ‎‎– which is actually a path and a goal. The Shi’ahs engage many activities in Muharram and ‎Arba’in to serve the Ahl al-Bayt and pilgrims and don’t hesitate to try to revive the religious ‎rituals.”‎

Coinciding with the month of Muharram, the eighth annual “Zayd ibn Ali: Halif al-Quran” ‎Conference was held with the participation of representatives of holy shrines, the scholars of ‎the Islamic Seminaries, intellectuals and thinkers in the city of al-Hillah, Iraq, with the slogan ‎‎“Fathers of the Revolution: From the Martyr to the Grandchildren.”‎
‎ ‎
Speaking at the conference, Hujjat al-Islam Sayyid Ala Aale-Yahya al-Musawi, the custodian ‎of the Holy Shrine of Hadhrat Zayd al-Shahid, said, “Hadhrat Zayd inherited the traits of his ‎predecessors and took steps on the path of social reform and he sought to exalt the words ‎of God. The uprising of Hadhrat Zayd al-Shahid was an extension of the uprising of his great-‎grandfather, Imam al-Husayn.”‎

His Eminence added, “It’s narrated in a hadith that the Prophet Muhammad said to [his ‎grandson Imam al-Husayn]: ‘From your progeny there will be a man by the name of Zayd, ‎who along with his supporters, will bypass many front rank fellows of Paradise on the Day ‎of Resurrection. They all will enter Paradise without scrutiny.’”‎

It is noteworthy that Hujjat al-Islam Sayyid Izzuddin al-Hakim visited the exhibition of ‎Hadhrat Zayd on the sidelines of the conference.‎

Tags: Hakim Iraq Zayd ibn Ali
Short Link rasanews.ir/201sLC
Share
0
Please type in your comments in English.
The comments that contain insults or libel to individuals, ethnicities, or contradictions with the laws of the country and religious teachings will not be disclosed