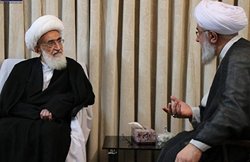 The new secretary-general of the Ahl al-Bayt World Assembly called the assembly a link ‎between the sources of emulation and followers of the Ahl al-Bayt in the world and added, ‎‎“The letter of the Supreme Leader of the Islamic Revolution to the youth of the West ‎neutralized Islamophobia in the West.”‎

RNA – Ayatollah Dr. Reza Ramazani, the new secretary-general of the Ahl al-Bayt World ‎Assembly, met with Grand Ayatollah Hoseyn Nouri-Hamadani said that due to the Islamic ‎Revolution, we have a golden opportunity and the number of Muslims and Shi’ahs has ‎increased. ‎

The former imam of the Islamic Centre of Hamburg in Germany stated that the enemies and ‎malicious people don’t allow pure Islam to be propagated through the media and said, “95% ‎of the media under the control of the Zionists and no day passes without a doubt being ‎spread against Islam and Shi’ism.”‎

Ayatollah Ramazani said, “Extremist Islam is propagated in other countries and in some ‎countries we have anti-Islamic political parties and groups are trying to prevent pure Islam ‎from being introduced in the world. For this reason, the phenomenon of extremist Islam, ‎among both Shi’ahs and Sunnis, is pursued. There are networks in the United Kingdom and ‎the United States that engage with some of these deviant aspects.”‎

His Eminence added, “If ‘Ashura’ is searched for in the Latin language, blood appears on the ‎front page. Unfortunately in Europe, there is also liberal Islam. There is a project in Berlin ‎that says the Quran and its audience were Arabs and therefore, it can’t be a book for all of ‎the people of the world and we responded that the audience of the Quran were the people ‎of reason and intuition.” ‎

Ayatollah Ramazani stressed, “Large funds are being spent in the West to create a project of ‎deviation in Europe and the United States. The letter from the Supreme Leader of the Islamic ‎Revolution [Ayatollah Khamenei] to the youth of the West neutralizes the extremist Western ‎view based on Iranophobia, Shiaphobia and Islamophobia and propounded the Supreme ‎Leader as an intellectual reformer in the world today.”‎