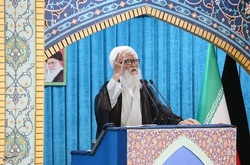 Ayatollah Movahedi-Kermani highlighted the reason behind United States’ recent allegations ‎against Iran and said Washington, which is aware of the failure of its economic pressures, ‎has resorted to lies against the Islamic Republic.‎

RNA – Ayatollah Mohammad-Ali Movahedi-Kermani said, addressing worshippers attending ‎Friday prayers in Tehran said, “Having realized that its economic pressures on Iran have had ‎no effect, the United States resorted to lying and trying to tarnish the Islamic Republic’s ‎image as much as it can.”‎

He further pointed to recent remarks by Supreme Leader of the Islamic Revolution, ‎Ayatollah Sayyed Ali Khamenei, and said, “The Leader has repeatedly told those who have ‎pinned their hopes on the West that they should abandon their hope for help from outside.”‎

‎“The enemies would lie a thousand times to serve its interests,” the cleric added, calling for ‎vigilance against economic and political plots hatched by the United States against Iran.‎

The remarks came against the backdrop of increased tensions between Iran and the United ‎States after the Islamic Republic shot down an advanced United States spy drone over its ‎territorial waters and also recent attacks by Yemeni forces on Saudi oil facilities, with ‎Washington and Riyadh claiming Iran was behind them.‎

The Islamic Revolution Guards Corps (IRGC) said on June 20 that a United States spy drone ‎that violated the Iranian territorial airspace in the early hours of the day was shot down by ‎the IRGC Aerospace Force’s air defence unit near the Kuh-e-Mobarak region in the southern ‎province of Hormozgan.‎

Tensions between the United States and Iran escalated further after Yemeni armed forces ‎conducted a large-scale operation against Saudi Arabia’s Aramco oil installations on Saturday, ‎in response to the Saudi-led war on their country.‎

The Yemeni Ansarullah movement immediately took credit for the attacks, but United States ‎Secretary of State Mike Pompeo swiftly accused Iran of being behind the assault, without ‎providing any evidence. Tehran categorically rejected the allegations.‎

Meanwhile, Saudi Arabia claimed on Wednesday that the strikes on its oil infrastructure came ‎from the “north” and were “unquestionably” sponsored by Iran, adding that the Houthis were ‎not responsible for the assault despite claiming it.‎

Shortly after the Saudi announcement, the spokesman for Yemeni Armed Forces, however, ‎reiterated it was behind the weekend attack, stressing that the Houthis have new drones, ‎powered by “normal and jet engines” that can reach targets deep in Saudi Arabia.‎

During a press conference in the capital Sana’a, Brigadier General Yahya Sari said, “Our ‎forces have reached a high level of efficiency and ability. They can manufacture various ‎types of unmanned aerial vehicles in record time. The Second Deterrent Balance Operation, ‎which targeted Saudi oil installations, is a perfect example of the capabilities of our forces in ‎terms of planning and implementation.” ‎

Tags: Movahedi Kermani Yemen
Short Link rasanews.ir/201sJt
Share
0
Please type in your comments in English.
The comments that contain insults or libel to individuals, ethnicities, or contradictions with the laws of the country and religious teachings will not be disclosed