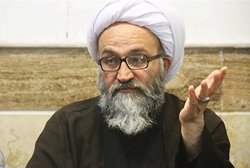 Ayatollah Heydari said that the JCPOA has brought almost no ‎achievements for Iran, said, ‎‎“It’s clear to everyone today ‎that we can no longer solve any of the problems of the ‎country through the JCPOA and by looking toward the West.”‎

RNA – In an exclusive interview with Rasa News Agency, Ayatollah Mohsen Heydari, the ‎representative of the people of Khuzestan province in the Assembly of Experts, said that the ‎Joint Comprehensive Plan of Action (JCPOA) has brought almost no ‎achievements for Iran, ‎said, “It’s clear to everyone today ‎that we can no longer solve any of the problems of the ‎country through the JCPOA and by looking toward the West.”‎

The Iranian scholar pointed to the disloyalty of the Europeans and Americans and noted the ‎brazen departure of the United States ‎from the JCPOA, saying, “Today, everyone knows that ‎the Europeans have given only slogans and have no ‎practical action to deliver on the ‎promises that they have given.”‎
‎ ‎
He said that it’s a wonder that anyone can say that Iran can solve its ‎problems through the ‎JCPOA and added, “The only way to solve the problems of the country is to implement ‎the ‎Resistance Economy, pay attention to internal capacities and to use specialized human ‎resources.”‎
‎
Ayatollah Heydari described the disloyalty of the United States as a result of the misplaced ‎distrust of certain officials in the West and noted, “As it has been demonstrated in issues ‎such as scientific advances and the missile industry, the power of the Iranian human ‎resources is very high. This capacity exists in all areas and must be taken advantage of.”‎

His Eminence insisted that officials must not keep the country waiting on the JCPOA any ‎longer and considered the ‎outcome of the wrong strategy of negotiating and trusting in the ‎West as “regretful” and stated, “If the country’s officials had sought to implement the ‎strategy of the Resistance Economy as emphasized by the Supreme Leader of the Islamic ‎Revolution [Ayatollah Khamenei] from the beginning and hadn’t followed the mirage created ‎by the United States, we wouldn’t have faced as many problems today.”‎
‎ ‎
He said that diplomacy of negotiation ‎didn’t have any positive consequences for the Iranian ‎people and said, “We all know that the JCPOA brought no benefit to the country at all, so ‎what is the guarantee that repeating it will bring anu result for the country?”‎