West seeks to replace Islamic culture with its culture 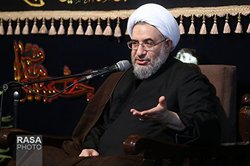 The secretary-general of the World Forum for the Approximation of Islamic Schools of Thought ‎stressed that Western teachings don’t answer the needs of society and warned that the West to ‎attempting to replace Islamic culture with its culture in Iranian society. ‎

RNA – Speaking at a mourning ceremony on Tasu’a, the ninth night of Muharram, at Shohada ‎Husayniyah in Qom, Ayatollah Mohsen Araki, the secretary-general of the World Forum for the ‎Approximation of Islamic Schools of Thought, said that throughout history, many people have ‎been influenced by scholars and elders and said, “In the past, scholars had a greater presence ‎in the market and influenced people directly.”‎
‎ ‎
The member of the Assembly of Experts added, “Through these encounters many merchants ‎were attracted to the scholars and eventually became great students of these great ‎personalities. The scholars and the clergy have a special role to play in the culture of society ‎and must lead people to religion through their behaviour.”‎

He said that the West is seeking to replace all other cultures, especially Islamic and religious ‎ones, with their culture and emphasized, “We must be careful that this ominous goal isn’t ‎achieved and there is no other culture which is as rich as religious and Islamic culture.”‎
‎ ‎
Ayatollah Araki emphasized the need for a sociological analysis of the behaviours of the ‎presidents of the United States and said, “By analyzing these behaviours, we can discern the ‎difference between world leaders in order to have a correct view of the cultural differences of ‎societies.”‎

The member of the Society of Seminary Teachers of Qom described the Husayni school of ‎thought “a human and society-building school” and said, “The religious teachings of Imam al-‎Husayn have crossed all boundaries and the Master of the Martyrs [Imam al-Husayn] had been ‎training individuals like Ali al-Akbar and Qasim for many years and the army of Imam al-Husayn ‎was comprised of youth.”‎
‎ ‎
He said that sociologists must research the phenomenon of Husayni love in the world, ‎especially the Arba’in pilgrimage and noted, “Ashura and Arba’in are an international and ‎influential social phenomenon. Why do scholars who are constantly commenting on different ‎issues and conditions have nothing to say in this regard?” ‎

Ayatollah Araki added, “It seems that some of the lack of research is deliberate because by ‎researching these fields, the huge capacity of the Husayni school is identified and it’s obvious ‎that Western teachings don’t answer the needs of society and Alawi and Husayni culture ‎dominates over them.”‎

His Eminence stressed, “Other religions and denominations wonder about the power of the ‎Husayni school and the Shi’ah clergy and how this school has the power to create social ‎mobilization. The personalities of other religions have acknowledged that they don’t have the ‎power to propagate to young people.”‎
‎ ‎
He added, “Today, with the divine grace and due to the Husayni school, more and more ‎Western youth from Europe and the United States participate in the Arba’in pilgrimage, which is ‎a sign of the divine power of the school of Imam al-Husayn that some don’t like to proceed.”‎

Tags: Araki Muharram Ashura Tasua
Short Link rasanews.ir/201sHC
Share
0
Please type in your comments in English.
The comments that contain insults or libel to individuals, ethnicities, or contradictions with the laws of the country and religious teachings will not be disclosed