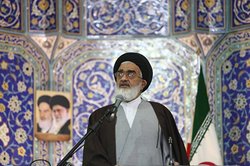 Ayatollah Sa’idi said Iran’s third step in reducing it’s commitments to the JCPOA was a sign of ‎the lack of credibility of the United States and Europe and added, “Talking about engaging in ‎new negotiations with the enemies isn’t acceptable to the officials and the people in any ‎manner.”‎

RNA – In his Friday prayer sermon delivered to a large and fervent crowd of believers at ‎‎‎‎‎‎‎‎‎‎‎‎‎‎Qom’s Qods Prayer Hall, Ayatollah Sayyed Mohammad Sa’idi said that the days of Tasu’a ‎and Ashura had historically been an inspiration for movements against oppression and said, ‎‎“Imam Khomeyni used the great capacities of Tasu’a and Ashura to pursue an Islamic ‎movement and launched the Islamic Revolution with a cry for justice and cruelty. In 1978, it ‎was the marches of Tasu’a and Ashura that became a referendum against the Pahlavi ‎regime. The uprising of the people on the day of Ashura revealed the substance of the ‎Islamic Revolution and the movement of the late Imam and the people.”‎
‎ ‎
The custodian of the Holy Shrine of Lady Fatimah al-Ma’sumah said, “In the present era, our ‎religious duty is to pledge allegiance to the deputy of Imam al-Mahdi, namely Imam ‎Khamenei, and shout ‘Labbayk Ya Mahdi’ [‘I am at your service, Oh Mahdi’]. ‘Labbayk Ya ‎Khamenei’ is a manifestation of ‘Labbayk Ya Husayn’ and Labbayk Ya Mahdi.’ That is why ‎‎‘Labbayk Ya Khamenei’ has become a widespread cry and the leader of the Islamic ‎Resistance in Lebanon [Sayyid Hasan Nasrallah] and the oppressed Palestinian and Yemeni ‎people and the Lebanese Resistance Front shout ‘Labbayk.’”‎

He added, “In order to save the oppressed from the arrogant powers and to pave the way ‎for the establishment of the universal government of Imam al-Mahdi, we must pledge ‎allegiance to the Supreme Leader of the Islamic Revolution and pay attention to his ‎directives and remarks.” ‎

In another part of his remarks, Ayatollah Sa’idi referred to Iran’s third step to reduce its ‎obligations to the JCPOA and said, “Today, if the Islamic Republic of Iran implements the ‎third step to reduce its nuclear obligations, the people will shout ‘Labbayk’ to the Supreme ‎Leader in response to the impudence and excessiveness of the enemies.”‎

The representative of the Supreme Leader in ‎Qom added, “In the West’s view, Iran’s third ‎step to reduce its obligations to the JCPOA would lead to the greater discrediting of Europe ‎and the United States. The third step has practically made the JCPOA meaningless and this ‎comes at a time when Trump’s policies against Iran have practically failed.” ‎

Ayatollah Sa’idi said that with Iran’s progress in the defence and military arenas and the ‎downing of the United States’ advanced drone, Trump has no military option available and ‎said, “The sanctions of the United States didn’t lead to the collapse of the Iranian economy ‎and these events have dramatically increased the position of the Islamic Republic of Iran. It ‎has been proven more than ever that ‘America can’t do a damned thing’ and that we have ‎trampled the United States. This isn’t just a slogan. This is a materialized reality.”‎
‎ ‎
His Eminence stressed, “Under the leadership of Wilayat al-Faqih [Guardianship of the ‎Jurisprudent], the Islamic Republic of Iran hasn’t only become a superpower in the region ‎but also a global superpower because Iran is following the law of God and the school of the ‎Ahl al-Bayt but the Western world follows the law of the jungle.”‎

He added, “In the law of the jungle, the enemies only think of destroying the other side and ‎negotiating with such people is a deadly poison. The only way to salvation and victory is to ‎rely on the capabilities and power of domestic forces and to resist the arrogant and bullying ‎powers.”‎

Ayatollah Sa’idi reiterated, “Influential Westoxified people must not give wrong advice to the ‎officials and know that talking about engaging in new negotiations with the enemies who ‎openly speak about their efforts to destroy the Islamic Republic of Iran won’t be acceptable ‎to the officials and the people.”‎

Tags: Friday Saidi Muharram
Short Link rasanews.ir/201sFh
Share
0
Please type in your comments in English.
The comments that contain insults or libel to individuals, ethnicities, or contradictions with the laws of the country and religious teachings will not be disclosed