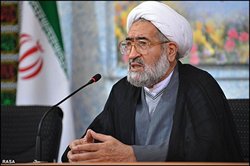 Hujjat al-Islam Ashtiani emphasized, “Like the Islamic Revolution in Iran, Hezbollah has ‎learned lessons from the schools of Imam al-Husayn and Ashura, which have shaken the ‎bodies of the Zionist regime and Zionists.”‎

RNA – Speaking at a mourning ceremony on the second night of Muharram at Qom’s ‎Shohada Husayniyah, Hujjat al-Islam Mohammad-Reza Ashtiani, the assistant director of the ‎Society of Seminary Teachers of Qom, praised Hezbollah’s brave response to the audacious ‎attacks by the Zionist regime and said, “Like the Islamic Revolution in Iran, Hezbollah has ‎learned lessons from the school of Imam al-Husayn and Ashura, which have shaken the ‎bodies of the Zionist regime and Zionists.”‎

Hujjat al-Islam Ashtiani described sin an act of oppression by man against his right and ‎added, “Sin is like a black blemish on the heart of the human being. If it’s ignored, it will ‎cover the whole heart and body of the sinner and therefore, we must repent quickly to ‎receive divine favour and forgiveness.”‎
‎ ‎
His Eminence considered supplication and benediction as insuring mankind and continued, ‎‎“Ziyarat Ashura is a revolutionary supplication that emphasizes wilayah (guardianship) and ‎the disavowal of the enemies and gives insight to mankind.”‎
‎ ‎
He said that we must recognize the enemies’ conspiracies and act against their will and ‎added, “It must not be assumed that the enemies of Islam today, such as the United States ‎and the Zionists, are less secure.”‎

Hujjat al-Islam Ashtiani said, “Having a relationship with and resorting to the Master of the ‎Martyrs [Imam al-Husayn] is means of salvation and insurance for mankind and for this ‎reason, we have observed that throughout history until now, all the greats have emphasized ‎upon the establishment of gatherings in commemoration of Imam al-Husayn.”‎

Tags: Ashtiani Ashura Muharram Husayn
Short Link rasanews.ir/201sEY
Share
0
Please type in your comments in English.
The comments that contain insults or libel to individuals, ethnicities, or contradictions with the laws of the country and religious teachings will not be disclosed