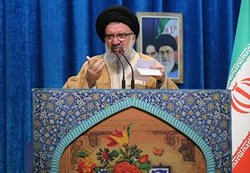 Ayatollah Khatami highlighted the futility of negotiation with the current administration of the United States and said any talks with the American promise-breakers would be madness.

RNA – Addressing worshippers at Friday prayers in Tehran, Ayatollah Sayyed Ahmad Khatami said, “As the Supreme Leader of the Islamic Revolution (Ayatollah Sayyed Ali Khamenei) has declared, no negotiation with the United States would take place and the (Iranian) officials and people have announced this in unison.”

“…Negotiation would be meaningful when it happens on an equal footing, otherwise, it cannot be called negotiation; it would be domination, and our nation has not accepted domination for forty years,” the cleric added.

The remarks came against the backdrop of increased tensions between Iran and the United States with Washington imposing new sanctions against the Islamic Republic.

According to Tasnim News Agancy, the United States has ratcheted up pressure on Iran since last year after unilaterally withdrawing from the 2015 nuclear deal, known as the Joint Comprehensive Plan of Action (JCPOA).

Since then, the administration of United States President Donald Trump is trying to reduce Iran’s oil exports to “zero,” and has sent an aircraft carrier strike group, a bomber squad, an amphibious assault ship, and a Patriot missile battery to the Middle East to try to stack up pressure on Tehran.

Iranian officials, however, have dismissed such moves as psychological warfare, saying the country has its own ways of circumventing the American bans and selling crude oil.

Tags: Khatami Iran Tehran
Short Link rasanews.ir/201sEC
Share
0
Please type in your comments in English.
The comments that contain insults or libel to individuals, ethnicities, or contradictions with the laws of the country and religious teachings will not be disclosed