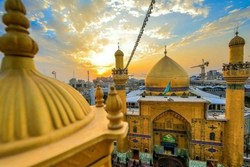 Simultaneous with the start of the eighth Ghadir Festival, the southern minaret of Imam Ali (AS) holy shrine was unveiled.

According to the correspondent of Rasa News Agency in Najaf Ashraf, simultaneous with the beginning of the eighth Ghadir Festival, the southern minaret of Imam Ali (AS) holy shrine, following its repair by Iranian Reconstruction Organization of the Iraqi Holy Shrines, was unveiled.

Upon the unveiling of the new minaret, the custodian of the holy shrine of imam Ali (AS) talked for those participating in the ceremony.