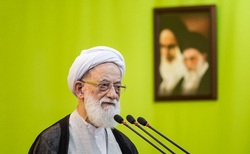 Ayatollah Emami-Kashani said, “Iran has always been in peace and wants peace for the ‎entire world.”‎

RNA – In his Friday prayer sermon in Tehran, Ayatollah Mohammad Emami-Kashani ‎said, “In the last four years, we showed that the Islamic Republic is seeking peace and ‎tranquility,” ‎

On the other hand, Ayatollah Emami-Kashani said, the United States and its “regional ‎subordinates also showed that they are after war and bloodshed.”‎

Elsewhere in his sermon, the top cleric praised the production of homegrown missile ‎defense system Bavar-373 (which means faith), which was unveiled by President Hassan ‎Rouhani on Thursday in a ceremony marking National Defence Industry Day. ‎

He said as the name of the defense system suggests, the Iranian nation can resist the ‎enemies through self-confidence and relying on internal capabilities.‎

Ayatollah Emami-Kashani also derided the attempts by the United States and its allies ‎against Iran, calling United States President Donald Trump and his regional allies ‎‎“foolish” for thinking that Iran might give in under pressure.‎

‎“Mr. Trump! You are stupid and your subordinates are stupid as well. You have shown ‎your stupidity to the world,” he said, adding, “But the Islamic Republic is brave and ‎strong [as] the Leader of the Revolution (Ayatollah Khamenei) and the Imam (Ayatollah ‎Khomeini) have injected the Iranian nation with this bravery.”‎

Tags: Emami Tehran Friday
Short Link rasanews.ir/201sCn
Share
0
Please type in your comments in English.
The comments that contain insults or libel to individuals, ethnicities, or contradictions with the laws of the country and religious teachings will not be disclosed