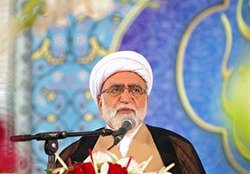 Hujjat al-Islam Marvi said, “We see the presence of Arba’in in Iraq, Syria and Yemen ‎wherein the tyrannical rulers of the region and the arrogant powers have been defeated.”‎

RNA – Speaking at the Second International Conference of Arba’in al-Husayni Activists held at ‎in the Qods Hall of the library of the Astan Quds Razavi in Mashhad, Hujjat al-Islam Ahmad ‎Marvi, referred to narrations about the love for the Ahl al-Bayt and stated, “Love for the Ahl ‎al-Bayt ‎isn’t meagre capital and it must be appreciated.”‎
‎ ‎
The custodian of the Astan Quds Razavi said that there is no criterion for measuring the ‎great movement of Arba’in [the commemoration of forty days after the tragic events of ‎Karbala] and added, “All these people are participating in the Arba’in pilgrimage with great ‎difficulty, some even travel on foot from Mashhad to Karbala. It’s a divine phenomenon and ‎cannot be explained and described.”‎

Hujjat al-Islam Marvi stressed, “We see the presence of Arba’in in Iraq, Syria and Yemen ‎wherein the tyrannical rulers of the region and the arrogant powers have been defeated.”‎

His Eminence said, “Arba’in is not only for Muslims but rather the attraction and love of ‎Imam al-Husayn also attracts non-Muslims. The march and service during Arba’in is the ‎‎‘colour of God’ and this sincere servitude gives colour to the individual.”‎
‎ ‎
He added, “If there are demonstrations by a few people it’s widely reflected in the arrogant ‎media but millions of people from different levels and ethnicities participate in the Arba’in ‎pilgrimage. The arrogant media doesn’t reflect this great movement, although they have had ‎to accept it and they have been compelled to devote a day to it but their ignorance and lack ‎of reflection to Arba’in in the media of the enemies of Islam is proof of this.” ‎

Referring to the spread of Ashura around the world, Hujjat al-Islam Marvi said, “If the Yazidis ‎had been able to silence the voice of truth of Imam al-Husayn on Ashura through shouts, ‎today this great movement, which is in continuation of the Prophet’s movement, would have ‎been silenced. Today, the radiance of Ashura is increasing day by day in the light of divine ‎grace.” ‎

Tags: Marvi Arbain Husayn Karbala
Short Link rasanews.ir/201sBW
Share
0
Please type in your comments in English.
The comments that contain insults or libel to individuals, ethnicities, or contradictions with the laws of the country and religious teachings will not be disclosed