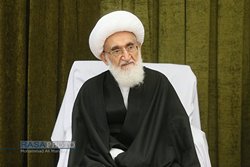 The revered source of emulation has condemned the ongoing killing of the people of ‎Kashmir and called for an immediate end to the acts of aggression and siege by the Indian ‎army against the people of this region. ‎

RNA – In a statement, Grand Ayatollah Hoseyn Nouri-Hamadani condemned the ongoing ‎‎killing of the Muslim inhabitants of Indian-occupied Kashmir and demanded an immediate end ‎‎to the acts of aggression and siege by the Indian army against the people of this region. ‎

Indian-occupied Kashmir has been under heavy security and an unprecedented ‎communication ‎lockdown since August 5th, when Indian Prime Minister Narendra Modi and ‎his government ‎decided to revoke the privileges of Jammu and Kashmir, including a right to ‎their own ‎constitution.‎

The message text of this imitation reference is as follows:‎

Unfortunately, unpleasant news is coming from Indian Kashmir these days. The silence of ‎‎international organizations and defenders of human rights concerning such actions is ‎regrettable.‎
‎ ‎
They have besieged the Kashmir Valley and cut off communications and have forbidden any ‎‎form of gathering, even Friday and congregational prayer. In the event of any gathering, ‎they ‎respond with bullets. The oppressed people do not even have the security to prepare ‎food and ‎acquire the basic necessities. Pictures and reports have reached us of which ‎mankind is not ‎capable of seeing and all these actions are inhumane behaviour.‎
‎ ‎
All free people, especially the Islamic Ummah, government officials, scholars and human ‎rights ‎institutions must take serious action concerning this matter. If they remain silent, ‎Kashmir will ‎enter a more dangerous and unfortunate stage. Therefore, it is the duty of each ‎one of the free ‎people of the world – including all colours, races, religions and especially the ‎Islamic Ummah and ‎the governments – not to remain silent in the face of this great insult ‎and inhumane aggression.‎
‎ ‎
The Indian authorities must also recognize that its oppressive actions will only result in ‎instability ‎and create further distance between the followers of religions across India and ‎they must provide ‎the grounds for the peaceful life for all Shi’ahs, Sunnis and Hindus and ‎they must stand together ‎as they did in the past.‎

In condemnation of this inhumane behaviour, I call for an immediate end to the killings and ‎‎military blockade of Kashmir and we emphasize upon the defence of every oppressed ‎person ‎anywhere in the world.‎
‎ ‎
Hoseyn Nouri-Hamadani ‎
‎15 August 2019‎

Tags: Nouri Kashmir India
Short Link rasanews.ir/201sBV
Share
0
Please type in your comments in English.
The comments that contain insults or libel to individuals, ethnicities, or contradictions with the laws of the country and religious teachings will not be disclosed