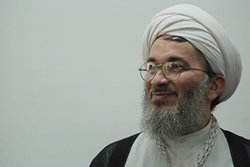 RNA – In an exclusive interview with Rasa News Agency, Hujjat al-Islam Ali Ehtesham-‎Kashani, a senior lecturer in the Islamic Seminary of Qom, spoke of the Day of Arafah and ‎said, “The highlights and characteristics of the first ten blessed days of the month of Dhil-‎Hijjah are the Day of Arafah and Eid al-Adha, which are the best hours, nights and days for ‎the servants of God after the holy month of Ramadhan throughout the year.” ‎
‎ ‎
He added, “If the righteous servants of the truth want to be in the presence of the Lord in ‎order to receive all the rewards, the best way to attain this is to attend the prayers and ‎festivities on the afternoon of the Day of Arafah.”‎
‎ ‎
Hujjat al-Islam Ehtesham-Kashani said, “Certainly, those who are participate in the gatherings ‎in which the Supplication of Arafah is recited, in addition to focusing on its apparent ‎meaning, will certainly benefit from the truth of its meaning. If the Holy Quran has decreed ‎‎‘Call Me, and I will hear you!’ all the conditions must be provided and one of the main ‎obstacles that deprives one from presence in a true prayer is disregarding the meanings of ‎the supplications.”‎
‎ ‎
His Eminence stated, “What is important on the Day of Arafah, both for those on the Plain ‎of Arafat near the Mount of Mercy and for those who are far away from the Plain of Arafat, ‎is that throughout this year, man understands this special day with all its qualities. In order to ‎come to the truth of the knowledge of God Almighty, man must make amends for his sins ‎and with deep and precise connectedness, he can reform his relationship with God ‎throughout the year.”‎
‎ ‎
He ‎said, “We hope that all of our acts of worship will be accepted on this day and we pray ‎for all those who are striving to defend the holy Shrines in Iraq, Syria, Palestine and Yemen ‎and don’t neglect to pray for the destruction of the enemies of Islam and the Islamic ‎Revolution. We pray to God that our problems are resolved due to the supplications recited ‎on this day.”‎

Hujjat al-Islam Ehtesham-Kashani ‎noted, “As the Supreme Leader of the Islamic Revolution ‎‎[Ayatollah Khamenei] has said, we have entered the second phase of the building of ‎ourseves, society and civilization during the end times. The best tools are supplication and ‎deep communion with God.”‎

Tags: Ehtesham Kashani Arafah
Short Link rasanews.ir/201s9g
Share
0
Please type in your comments in English.
The comments that contain insults or libel to individuals, ethnicities, or contradictions with the laws of the country and religious teachings will not be disclosed