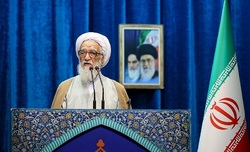 RNA – “The Indian government should seriously avoid dealing with Muslims harshly because ‎it is neither in its interest nor the region’s,” Ayatollah Mohammad-Ali Movahedi-Kermani said, ‎addressing worshippers in Tehran on Friday.‎

His comments came after the Indian government revoked the special status of India-‎administered Kashmir, in a move that risks fueling already heightened tensions with ‎neighboring Pakistan.‎

Monday’s presidential decree revoked Article 370 of India’s constitution that guaranteed ‎special rights to the Muslim-majority state, including its right to its own constitution and ‎decision-making process for all matters except defence, communications and foreign affairs.‎

In the lead-up to its move, India sent thousands of additional troops to the region, imposing ‎a curfew on parts of it, shutting down telecommunications and arresting political leaders.‎

Both India and Pakistan claim Kashmir in full, but rule it in part. The two neighbors have ‎fought two of their three wars over the disputed territory.‎

Tags: Tehran Movahedi Friday
Short Link rasanews.ir/201s95
Share
0
Please type in your comments in English.
The comments that contain insults or libel to individuals, ethnicities, or contradictions with the laws of the country and religious teachings will not be disclosed