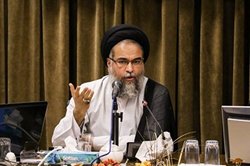 Hujjat al-Islam Madani said that the issue of chastity and ‎hijab ‎is a political weapon in ‎addition to being a religious duty and added, “‎We are engaging in a serious battle today.”‎

RNA – Speaking at the “Chastity and the Hijab” Conference which was held by the Chastity ‎and ‎Hijab Committee along with al-Zahra University in Qom‎, Hujjat al-Islam Sayyed ‎Mahmoud Madani, the dean of this university and said, “The origin of poor hijab is more of a ‎political discussion than a discussion on natural pleasure.”‎

Explaining that the issue of hijab and chastity is political weapon in addition to being a ‎religious duty, he added, “We are engaging in a serious battle today.”‎
‎ ‎
He added, “We have a legal limitation in regard to the discussion of hijab and chastity and ‎that is the boundary of what which is obligatory and that which is forbidden and we have a ‎security and protective boundary that prevents us from reaching the boundaries of what ‎which is obligatory and that which is forbidden. We also have a boundary of precaution ‎which we must not cross.”‎

Hujjat al-Islam Madani‎ stated, “The next issue is the limit of security ‎which we must observe. ‎In this regard, the regulations of chastity and hijab were discussed in the council of al-Zahra ‎University for several months and its cultural issues were taken up by the deputy of cultural ‎propagation [Hujjat al-Islam Hoseyn Tehrani].”‎
‎ ‎
His Eminence said, “We must not go out of the limitations of equilibrium in regard to the ‎issue of chastity and hijab ‎and go to extremes. Our ultimate goal is to educate people and if ‎we find that excessiveness has the opposite effect, it will certainly have to be reconsidered ‎so that we don’t go astray from the correct path.”‎
‎ ‎
He emphasized, “We must be sensitive to extremists in regard to chastity and hijab in order ‎not to turn people away from region.”