UK must not play with the lion’s tail 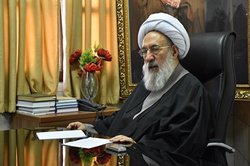 A member of the Assembly of Experts said that the IRGC’s seizure of the British-flagged ‎Stena Impero oil tanker has shown the strength of Iran’s armed forces and warned the ‎enemies, especially the United Kingdom and the United States ‎not to play with the lion’s tail.‎

RNA – In an exclusive interview with Rasa News Agency, Hujjat al-Islam Javad Mojtahed-‎‎‎Shabestari, the representative of the people of West Azerbaijan province in the Assembly of ‎‎‎Experts‎, ‎praised the action by the Navy of the Islamic Revolutionary Guard Corps (IRGC) in ‎capturing the British oil tanker Stena Impero in the Strait of Hormuz on July 19th and said, ‎‎“The IRGC’s capture of the British tanker led to peace of mind for the great Iranian people.”‎
‎ ‎
The teacher in the Islamic Seminary added, “The decisive action by the IRGC was in ‎response to the British forces’ illegal and aggressive seizure of the Iranian tanker [Grace 1]. ‎The actions by the IRGC ‎indicates the ascendancy and the authority of the Islamic Republic ‎of Iran.”‎

He stressed that the IRGC were as acting in regard to the verse of the Holy Quran: “Should ‎anyone aggress against you, assail him in the manner he assailed you” [2:194] and stated, ‎‎“The Holy Quran says that you have the right to reciprocate against any act of aggression ‎by the enemies.” ‎

Hujjat al-Islam Mojtahed-‎‎Shabestari said that in terms of international regulations, Iran’s ‎action was completely legal, the Stena Impero ‎was seized by the IRGC but the tanker was ‎handed over to the Ports and Maritime Organization until the legal process is finished. ‎

The member of the Assembly of Experts ‎stated, “It’s hoped that this is a lesson for all of ‎the enemies of the Islamic Republic so that they never violate the sanctities of revolutionary ‎and Islamic Iran and don’t play with the lion’s tail.”‎

He explained, “The IRGC has always been very active in developing defensive equipment, ‎protection and serving the Islamic Revolution, which has angered the enemies. For this ‎reason, the IRGC has been sanctioned and have accused it of being a terrorist group.”‎
‎ ‎
Hujjat al-Islam Mojtahed-‎‎Shabestari stressed that these hostilities and accusations have been ‎made while the IRGC are the frontier guards of the Islamic homeland and their revolutionary ‎work has always been implemented in a good manner and has been praised by the Iranian ‎people and endorsed by the Supreme Leader of the Islamic Revolution [Ayatollah ‎Khamenei].”‎