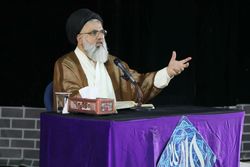 Hujjat al-Islam ‎Naqvi ‎said, “The international media is absolutely silent about Shaykh ‎Zakzaky and there is no news about him in the Pakistani media. May ‎God help the Nigerian ‎believers and save Shaykh Zakzaky from tyranny and destroy these ‎oppressors.”‎

RNA – In his Friday prayer sermon delivered to a large and fervent crowd of believers in ‎‎the‎ ‎‎‎‎‎‎‎‎‎‎‎‎‎‎Pakistani city of Lahore, Hujjat al-Islam Sayyed Jawad ‎Naqvi ‎said that the most important ‎news event for Pakistan this week was Prime Minister Imran Khan’s visit to the United States ‎and noted, “The entire Pakistani government is very happy and there is an atmosphere of ‎celebration. They said that he was given a warm welcome and everyone seems to have ‎achieved something.”‎

The principal of Jami’at Urwat ‎‎al-Wuthqa Islamic ‎Seminary in Lahore ‎added, “This excitement ‎is being considered as a great success by the government. There has been lot said about ‎this visit. Today, also the United States Department of State sent a message to Prime ‎Minister Khan just after his return asking him to implement all that what he agreed to do. ‎Details of the agreements signed haven’t been released yet. This visit was very important for ‎Prime Minister Khan. There have been various types and forms of governments in Pakistan ‎and everyone has bowed to the United States and there is a 72-year-long history of such ‎visits. All of the heads of state throughout the visit the United States and give preference to ‎establishing relationship with them and the United States also does this for them but the ‎visits to the United States have never achieved anything for Pakistan.”‎

He added, “What have the visits by various Pakistani prime ministers given to the United ‎States? Every Pakistani prime minister has visited the United States after their election and ‎after the formation of a government, everyone waits and expectations are high on which ‎country they will visit and when they will go to the United States. This policy becomes clear ‎after seeing which country is the first country that the prime minister visits. Some prime ‎ministers visited Saudi Arabia immediately after being elected, as Prime Minister Khan did. ‎Some leaders make their first visit to China and some make their first visit to ‎the United ‎States. These are the three stops for Pakistan prime ministers and after establishing their ‎government, this act clarifies their political direction. Since Prime Minister Khan visited Saudi ‎Arabia, the policies became clear as to what he wanted in government.”‎
‎ ‎
Hujjat al-Islam ‎Naqvi referred to the circumstances facing Shaykh Ibrahim Zakzaky, the ‎imprisoned leader of the Shi’ah Muslims of Nigeria, and said, “In Nigeria there were mass ‎killings of protesters last week. Shaykh Ibrahim Zakzaky, the leader of the Islamic ‎Movement of Nigeria (IMN), has been imprisoned, wounded and poisoned by Nigerian ‎government. He was given poisoned food and the poison is spreading across his body. The ‎millions of Nigerian Shi’ahs are the trees planted by this elderly person. There were no ‎Shi’ahs in Nigeria until the 1980s and this scholar brought them to Shi’ism. He studied in Qom ‎and after recognizing the truth, he went back to his homeland and engaged in propagation. ‎Due to his efforts, today there are millions of Shi’ahs in Nigeria and such a large number is ‎not present in any other African country. This is the outcome of the efforts of this scholar ‎and his companions.”‎

His Eminence added, “When his efforts were seen blossoming by the enemies, specifically ‎the House of Saud, the Nigerian government and army, carried out mass killings of Shi’ahs. ‎Members of the IMN were arrested and tortured several times. In 2015, a massacre was ‎carried out against the IMN and a number of its members and Shaykh Zakzaky’s sons were ‎martyred and he and his wife were wounded and imprisoned. His wounds haven’t been ‎treated yet and on top of this they have poisoned him. There are demands for him to be ‎sent him outside Nigeria if he can’t be treated inside the country. The Iranian parliament has ‎written a letter to the Nigerian government to send him to Iran. Many other intellectuals, ‎personalities and people from around the world have written letters to send him out of ‎Nigeria.”‎

He added, “This past Monday (July 22nd), another peaceful protest was attacked and a large ‎number of people were wounded. In addition to this, the wounded weren’t allowed to be ‎admitted to the hospital, instead the victims were arrested while gravely injured and taken to ‎prison. This is such a barbaric system in Nigeria. The international media is absolutely silent ‎and there is no news about him in the Pakistani media. May God help the Nigerian believers ‎and save Shaykh Zakzaky from tyranny and destroy these oppressors.”‎

0
0
Answer
May Allah continue to be with you for showing concern.Indeed the end of the world arrogant is at hand.May Allah destroy them and their agents.
Anonymous

0
0
Answer
ELAHEE YA RABBEE
Please type in your comments in English.
The comments that contain insults or libel to individuals, ethnicities, or contradictions with the laws of the country and religious teachings will not be disclosed