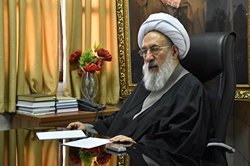 Hujjat al-Islam Mojtahed-‎Shabestari ‎said that reciprocal retaliation against the enemies has a ‎Quranic and rational basis and insisted that Islamic Iran will give a decisive response to any ‎action by the enemies.‎

RNA – In an exclusive interview with Rasa News Agency, Hujjat al-Islam Javad Mojtahed-‎‎Shabestari, the representative of the people of West Azerbaijan province in the Assembly of ‎‎Experts‎, referred to the decisive and brave operation by the Navy of the Islamic ‎Revolutionary Guard Corps (IRGC) to capture the British-flagged oil tanker Stena Impero and ‎said, “This tanker violated the rules of navigation in international waters and was captured by ‎the powerful forces of the IRGC.”‎

The representative of West Azerbaijani province in the Assembly of Experts stated that this ‎operation contained a message of dignity, power and reciprocal retaliation against those ‎transgressing against the rights of the Iranian people and said, “‘Reciprocal retaliation’ is a ‎jurisprudential and rational principle. In other words, this issue has been accepted both in ‎shari’ah [religious law], in rational practice and in international law.”‎
‎ ‎
He noted, “Countering the obvious aggression of the malicious British government against ‎the rights of the proud nation of Iran must be carried out in a reciprocal ‎manner and the ‎IRGC’s decisive response was in the same direction.”‎
‎ ‎
Hujjat al-Islam Mojtahed-‎Shabestari argued that the powerful operation by the IRGC ‎demonstrated the power and decisiveness of the Islamic Republic to the enemies and added, ‎‎“Today, the allies of the Islamic Republic feel a sense of honour and pride in regard to such ‎a move.”‎
‎ ‎
The teacher in the Islamic Seminary emphasized that the Islamic Republic stands against all ‎aggressors and said, “A country that was dominated by the colonial powers for many years ‎and whose rulers were slaves to their British and American masters, today bravely counters ‎the bullying of the arrogant powers of the world and this authority has been obtained with ‎the blessing of Islam and Wilayah al-Faqih [Guardianship of the Jurisprudent].” ‎

He noted that by relying on Islam and Wilayah al-Faqih, Iran can give resolute responses to ‎the aggressors, said, “The Supreme Leader of the Islamic Revolution [Ayatollah Khamenei] ‎said that ‘the era of tit-for-tat has come to an end.’ Therefore, any malignant act that comes ‎from the enemies will face an aggressive response.”‎
‎ ‎
Hujjat al-Islam Mojtahed-‎Shabestari ‎argued that the power, courage and strength of the ‎Islamic Republic will force the enemies to retreat and said, “If the enemies continues their ‎abusive actions, they will undoubtedly be faced with more intense reactions from the Islamic ‎Republic.”‎
‎ ‎
He praised the efforts and power of the IRGC and said, “Thanks to the militant men of the ‎IRGC for the courageous move which they have gifted to the Iranian people.”‎