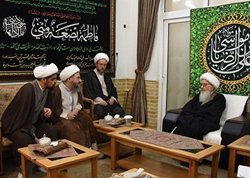 Ayatollah Vahid-Khorasani emphasized on answering the questions and ‎ investigate the ‎affairs ‎ of the Hajj pilgrims and stressed that making use of the spiritual opportunities and ‎observing the rules and traditions of the Hajj is essential. ‎

The Hajj Delegation stated that they have developed face-to-face and 24-hour telephone ‎answering services, a cellphone application which contains jurisprudential rulings on the Hajj ‎and the preparation and publication of Hajj rulings on the internet for the pilgrims. ‎

The revered source of emulation addressed the Hajj Delegation ‎and said, “Your duty is to ‎answer questions and investigate the affairs of the Hajj pilgrims, which is better than the ‎recommended acts.”‎
‎ ‎
In his advice to those who are privileged to perform the Hajj pilgrimage, Ayatollah Vahid-‎Khorasani added, “Those who are performing an obligatory Hajj should perform the acts of ‎the Hajj for themselves and give its reward to Imam al-Hasan al-Askari and it’s better for ‎those who are performing a recommended Hajj to perform it on behalf of the Imam and gift ‎it to the pilgrims on route to or from the Hajj, the reciters of Surah al-Tawhid and the Imam ‎of the Time [Imam al-Mahdi].”‎

It should be noted that Imam al-Askari spent most of his life under house arrest in Samara ‎and it’s famously said that he was the only Imam who didn’t perform the Hajj.‎

In recognition of the greatness of the Jannat al-Baqi cemetery in Madinah and the pilgrimage ‎to the four Imams whom are buried in this sacred cemetery, His Eminence ‎stated, “The ‎pilgrims of Jannat al-Baqi cemetery, who are honoured to visit this holy place on foot, must ‎strive to perform this tradition and take other pilgrims.”‎
‎ ‎
In conclusion, Ayatollah Vahid-Khorasani recited a supplication for the health of the Hajj ‎pilgrims and advised them, saying, “During this journey, pray a lot for the reappearance of ‎the Imam of the Time.”‎

This year, the Hajj will commence on Friday, August 9th and will continue until Wednesday, ‎August 14th. ‎