Iranians have the necessary capacities, abilities and aptitude that the country needs 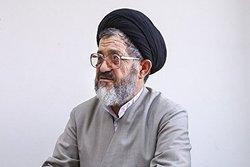 Hujjat al-Islam Akrami said that the Iranian people have the capacities, the abilities and the ‎aptitude that we need in our country and we ‎can achieve self-sufficiency. ‎

RNA – In an exclusive interview with Rasa News Agency, Hujjat al-Islam Sayyed Reza ‎Akrami, the chairman of the Cultural Council of the President of Iran, said that from the ‎beginning of the victory of the Islamic Revolution until today, it has been subject to the ‎brutal pressure of the United States and said, “From February 11, 1979 until today, we have ‎always been under threat, sanctions and psychological pressures.”‎

His Eminence stated that the pressures of the West have been intensifying and will never be ‎reduced in size and said, “We don’t believe that the superpowers have ever behaved in such ‎a cowardly way toward a country and a system before.”‎
‎ ‎
Referring to the Quranic verse “Prepare against them whatever you can of [military] power ‎and war-horses, awing thereby the enemy of God,” [8:60] he emphasized, “We must ‎consider the imposition of threats, sanctions and psychological operations by the West ‎against Iran an opportunity and use them to become a superpower.”‎
‎ ‎
Hujjat al-Islam Akrami‎ argued today that we must reach a level of power in which the ‎enemies fear us and said, ‎“We must achieve a degree of self-sufficiency and independence in ‎the Islamic world, so that ‎the enemies can’t implement their goals through pressure and ‎sanctions.”‎

His Eminence stressed that the officials must take the hostility of the enemies seriously and ‎believe in domestic capacities and said, “We have the capacities, the abilities and the ‎aptitude that we need in our country and we can achieve self-sufficiency but unfortunately, ‎we are unaware of these great capacities don’t use them to our full potential.”‎

Saying that if the internal capacities are neglected and don’t actualize our abilities, the ‎enemies will exploit our procrastination, he noted, “If we don’t strengthen our internal ‎capacities, the enemies will observe the weaknesses of our society and will invest in these ‎same areas.”‎
‎ ‎
Hujjat al-Islam Akrami noted that the enemies have misused Iran’s weaknesses and try to ‎impose more pressures upon the country and when we show our weakness to the enemies, ‎we will be faced with new excuses from them every day.‎
‎ ‎
He considered the policy of sanctions and pressure to be the lowest form of diplomacy in ‎the world and said, “We must know that as long as we act in accordance with the ‎commandments of the religious principles, the enemies won’t find any superiority over us. If ‎we don’t rely on domestic capacities, the enemies will become victorious over us.”‎

Hujjat al-Islam Akrami ‎said that if we don’t believe our internal power and don’t follow the ‎guidelines of the Supreme Leader of the Islamic Revolution (Ayatollah Khamenei), we won’t ‎achieve victory and said, “Today, unfortunately, we face a large volume of imports and if ‎this action isn’t uncontrolled and irregular imports aren’t prevented, we won’t achieve ‎economical self-sufficiency.”‎

Tags: Akrami Iran Sanctions USA
Short Link rasanews.ir/201s1g
Share
0
Please type in your comments in English.
The comments that contain insults or libel to individuals, ethnicities, or contradictions with the laws of the country and religious teachings will not be disclosed