Enemies seek to promote Islam without a clergy 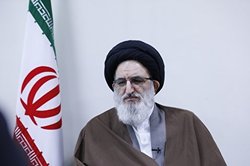 Ayatollah Hoseyni-Hamadani ‎said that the enemies are trying to promote a form of Islam ‎‎without a clergy among the people.‎

RNA – According to the Public Relations Office of the Representative of the Supreme Leader ‎in Alborz province, Hujjat al-Islam Kazem Khanlu, the head of the Women’s Islamic ‎Seminaries of Alborz province, met with a group of his deputies along with Ayatollah Seyyed ‎Mohammad-Mahdi Hoseyni-Hamadani ‎in his office in Karaj.‎

The Friday prayer leader of Karaj ‎said that our daughters are at risk of danger, “Girls are the ‎foundation of all the perfections and the growth of a society and are now exposed to the ‎hostility of the enemies.”‎
‎ ‎
The representative of the Supreme Leader of the Islamic Revolution (Ayatollah Khamenei) in ‎Alborz province ‎emphasized that if a girl is well educated, she will be a good mother and ‎wife in the future, “If education is taken away from our daughters, we won’t have families in ‎the future. Girls are a very important element. If our daughters aren’t well educated, we ‎won’t have educated people and great political and social personalities in the future.”‎
‎ ‎
Ayatollah Hoseyni-Hamadani emphasized that the Islamic Revolution was the source of much ‎goodness and blessings and stated, “One of these blessings, in the words of the Supreme ‎Leader is ‘the phenomenon of the Women’s Islamic Seminaries.’” ‎

He stressed that the clergy have no meaning without the Islamic Seminaries and said, “Islam ‎and Islamic beliefs are recognized and promoted by the scholars of Islam.”‎

Tags: Hoseyni Hamadani Women Girls Seminary Clergy
Short Link rasanews.ir/201ryX
Share
0
Please type in your comments in English.
The comments that contain insults or libel to individuals, ethnicities, or contradictions with the laws of the country and religious teachings will not be disclosed