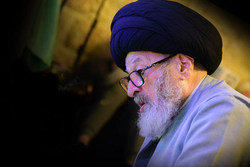 The burial will take place, God-willing, on Tuesday, Shawwal 29, 1440/July 2, 2019 in the ‎town of Bint ‎Jubayl in southern Lebanon after dhuhr (noon) prayers.‎

His Eminence was born in Najaf in 1941, where he was taught by his father, the scholar ‎Ayatollah Sayyid Abdul-Raouf Fadhlallah, in all stages of his studies and graduated from it and then engaged ‎in writing, compilation and research. He contributed to the research of the Lebanese ‎magazine Nour al-Islam.‎

He was a virtuous scholar and writer. He was a conscientious apostle on the path of Islam ‎and engaged in advocacy. He spent his life guiding generations of young, committed, ‎resistant believers, especially in the area of Bint Jbayl in southern Lebanon and its environs, ‎as well as the southern suburbs of Beirut since the beginning of the Islamic Resistance. He ‎enjoys great appreciation and respect among the people of the region.‎

His Eminence had long been a supporter and advocate of Islam and a supporter of the ‎Islamic Resistance and supported them in their battles against the Zionist enemies and ‎turned Friday prayers into a forum to shed light on all issues of concern to the citizens of ‎Lebanon and Muslims in general.‎

Tags: Fadhlullah Fadhlullah Scholar
Short Link rasanews.ir/201rxj
Share
0
Please type in your comments in English.
The comments that contain insults or libel to individuals, ethnicities, or contradictions with the laws of the country and religious teachings will not be disclosed