As the religion of humanity, Islam guarantees human rights 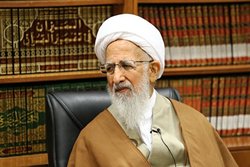 In a message to the Muslim Congress’ conference in the United States, Ayatollah Javadi-‎Amoli‎ referred to the teachings of Islam for the salvation of mankind and said, “Islam is the ‎religion of humanity and guarantees human rights.”‎

RNA – The 15th Annual Universal Conference of the Muslim Congress will be held on the ‎weekend of July 5th-7th in Phoenix, Arizona titled “Islam: Religion of Humanity.”‎

Ayatollah Abdollah Javadi-Amoli issued a statement to the Muslim Congress.‎

In his statement, the Iranian source of emulation, referred the the Holy Quran and said, “The ‎focus of this conference is ‘Islam: Religion of Humanity.’ This message is that which God ‎Almighty revealed at the beginning of the Prophet Muhammad’s mission in Surah al-‎Muddaththir [“The Cloaked One”] and in the chapters which are similar to it which were also ‎revealed at the beginning of the Prophet’s mission. He said that Islam is the religion of ‎humanity and guarantees human rights.”‎

He said that in the aforementioned chapter of the Holy Quran, God explained that He ‎determines human rights and the guidance of mankind and the straight path. Its secret is ‎that mankind, although the various people which make up mankind have different languages ‎and live in different eras, they are in fact one reality within the structure of humanity. They ‎may have different skin colours but they are in fact, one reality and God gave them ‎everything and they are all creations of God.‎

Ayatollah Javadi-Amoli ‎said that mankind is a reality although he has come in billions. All of ‎humanity is from one reality and the Quran is about human rights. The reminder of humanity ‎is man himself who has institutionalized the theology of revelation within everyone. ‎

His Eminence explained that if anyone returns to his original nature, they must understand ‎the will of billions of others. Man wants wisdom, justice, peace, security, trust, tranquillity, ‎fidelity and the purity of the soul. This is the will of all humanity. If anyone understands ‎these issues very well, he understands mankind and he understands human rights. Although ‎the Holy Quran has various verses in three different divisions, the combination of all three of ‎these divisions is human rights. In each one of the three divisions, the Holy Quran has a ‎universal section, which is for all of humanity, and a local section, which is specifically for ‎Muslims. It contains the rules of prayer and fasting within the Islamic arena.‎

This local sectional isn’t just related to national or regional issues but rather has common ‎plans with Jews, Christians and Muslims and others who follow Abrahamic and divine ‎religions. The universal section is related to all of humanity – whether monotheist or ‎polytheist, whether Muslim or non-Muslim, they all have truth and need truth and that if that ‎need is fulfilled, perfection is on its way. ‎

He stated that this conference must be coordinated with the three Abrahamic religions – ‎Judaism, Christianity and Islam. In the Islamic arena, the universal and general divisions ‎must be protected. In the general ‎arena, the monotheists’ section must be protected. The ‎universal section is the section of humanity. You can live well with anyone who lives on earth ‎if you follow these common principles and they also respect these common principles.‎

Tags: Javadi USA Human rights Muslim Congress
Short Link rasanews.ir/201rxK
Share
1
Please type in your comments in English.
The comments that contain insults or libel to individuals, ethnicities, or contradictions with the laws of the country and religious teachings will not be disclosed