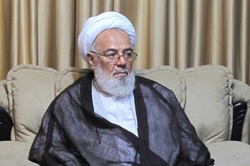 RNA – Speaking during his ethics class held in the meeting room of Rasa News Agency in ‎Qom, Ayatollah Hasan Mamdouhi likened life to a one-use‎ ‎takeout container and emphasized ‎the need to take advantage of life, moment-to-moment, in a maximum manner. ‎

The teacher of ethics in the Islamic Seminary of Qom continued, “Life is like one-use takeout ‎container ‎who’s door will open on the Day of Resurrection and sometimes its filled with light ‎and sometimes its filled with futility and absurdity. Therefore, try to fill the door that will ‎open on the Day of Resurrection with light. Don’t simply waste your life as the cost is ‎indescribable and if you spend all your reserves on the earth, you cannot return back to it.”‎
‎ ‎
He noted that time has a great capacity and can do a large amount of work in one moment. ‎After a short moments thought, Hurr ibn Yazid al-Riyahi was granted paradise. It has been ‎stated in narrations that one moment can be used for seventy years or that the Night of ‎Power, which is one night, can be used for as long as a thousand months. Therefore, you ‎must know your era and make the most out of it.”‎

Ayatollah Mamdouhi added to state that Allamah Sayyid Muhammad-Husayn Tabatabai was ‎a prodigy and stated, “Through the students that he trained, Allamah Tabatabai ‎has a great ‎right upon all of us. With complete accuracy and courage, he explained the capacity of Islam ‎among the books‏.‏‎”‎
‎ ‎
Referring to the fact that Allamah Tabatabai used the moments of his life in a good manner, ‎the member of the Society of Seminary Teachers of Qom said, “When they wanted to do ‎surgery on Allamah Tabatabai’s eyes, he didn’t allow the physicians to anesthetize him and ‎they worked on his eyes for more than two hours without him even blinking.” ‎

He argued that Tafsir al-Mizan spread the horizon of Shi’ism throughout the world and said, ‎‎“Through Tafsir al-Mizan, Allamah Tabatabai opened a new door. He offered specific ‎opinions on Quranic topics. Individuals such as Shaykh al-Kulayni, Shaykh al-Saduq and other ‎great scholars, although not infallible, lived like the Infallibles and all the Islamic rulings were ‎expressed through the hands of these individuals such that they didn’t allow even one alif of ‎the commandments revealed by the Prophet Muhammad to be reduced.”‎
‎ ‎
Ayatollah Mamdouhi ‎also remarked on the status and importance of the media and ‎addressing the media, he offered ethical recommendations, saying, “As much the media ‎grows, people will also grow. At the moment, our society is affected by the media and the ‎media must, along with having commitment to religious principles, have the utmost precision ‎and care in modeling and programming.”‎

Emphasizing that the media must avoid repetition, he stated, “If the media cites a problem ‎with the Islamic system, then its answer must also be provided.”‎

He recognized media integrity as an important principle and stated, “Media can play the role ‎of conducting and directing the community. Activists in this field must try to have a positive ‎impact on the growth of the community.”‎
‎ ‎
Ayatollah Mamdouhi ‎continued, “The media must be careful, in cases where the news is ‎bitter, they must not be discouraged and must properly digest the problem and answer it in ‎an open manner. Of course, attempts must be made to avoid the expression of fictitious ‎stories.”‎
‎ ‎
He explained, “The public culture of society is in the hands of the media and the growth of ‎the people is in the hands of the media groups. The media must not publish just any news ‎or publish just any photos and the media must also avoid improper descriptions of ‎individuals. Unfortunately, a significant part of the media is affected by this disease.”‎