Ayatollah al-Najafi called for the improving of communications technology 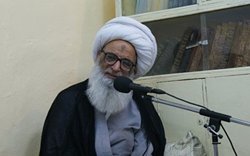 During his meeting with the Iraqi Minister of Communications, Ayatollah al-Najafi ‎stressed the ‎need to improve the level of technology and localization of projects.‎

RNA – Dr. Na’im Thajil al-Rubai, Iraq’s Minister of Communications, was at the head of a ‎delegation from this office of this ministry which met with Ayatollah Bashir al-Najafi, a ‎revered source of emulation, for a meeting in the holy city of Najaf.‎
‎ ‎
During this meeting, Ayatollah al-Najafi highlighted the need to serve the Iraqi people and ‎move on the path of national interests and said, “The dignity of the authorities is in serving ‎the country and the people.”‎
‎ ‎
He added that the Ministry of Communications ‎must launch programs to improve the level of ‎technology and localization of projects.‎

The Minister of Communications also presented a report on the activities of the ministry to ‎Ayatollah al-Najafi.‎

On June 23rd, Dr. al-Rubai announced the opening of three projects in the province of Najaf ‎to contribute to the development of telecommunications and Internet services in the ‎province.‎

Tags: Najafi Iraq Communications Ruba
Short Link rasanews.ir/201rvG
Share
1
Please type in your comments in English.
The comments that contain insults or libel to individuals, ethnicities, or contradictions with the laws of the country and religious teachings will not be disclosed